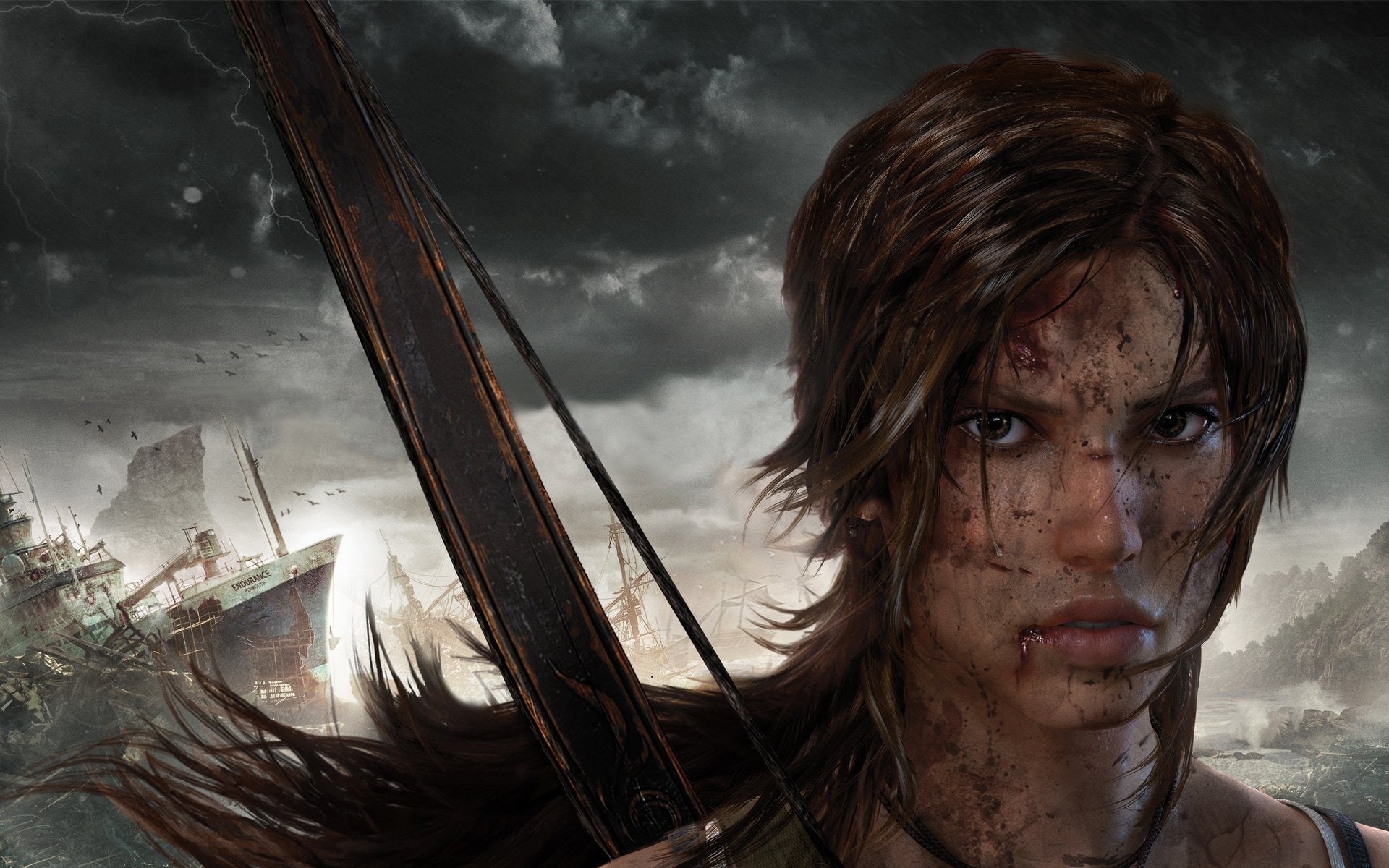 I love stepping into a well known franchise and/or universe and having only the most rudimentary understanding of the characters and world surrounding it… this is very much the case with the new reboot of the Tomb Raider series.  I think I can sum up everything I know about Lara Croft in about one sentence… she is an English adventurer with a tiny waist, huge breasts, grunts a lot, and uses two pistols, as well as having been portrayed by Angelina Jolie in two fairly mediocre film adaptations.  That’s it… that’s what I knew going in.

If it weren’t for the trailers which made this new game seem like Uncharted, I wouldn’t have bothered… but I loved Uncharted, and I needed a game to remind me of why I’ve been enjoying playing games over the last year and a half.  Turns out, Tomb Raider was exactly what I needed… a fun action adventure game where I can climb, shoot, and zip-line into a blissful, mindless fugue state.

This reboot starts with a 21 year old Lara Croft on-board the Endurance, a ship that she apparently has spent much of her youth on as she traveled with her adventuring, now deceased parents.  I believe all of this is hinted at, or outright stated in the first few minutes of the game, but I had to read up on the backstory of the game to glean that info.  For fans of the series, I’m sure this is already known… as a newbie, I would have enjoyed more expository info at the beginning… some sort of voice over or brief recap to bring me up to speed before meeting the characters and immediately kicking the story off.  If I’ve said it once, I’ve said it a thousand times… I love a good origin story, which apparently Tomb Raider is… I suppose I would have enjoyed a origin story to the origin story… but that’s just nit-picking.

Having just graduated from University, Lara has joined her friend Sam in searching for a lost island off the coast of Japan located somewhere within the Dragon’s Triangle, along with a reality TV archaeologist, Dr. Whitman; the captain of the ship, Roth; Alex, the ship’s technician; and Grim, Jonah, and Reyes… other various crew members.  After a brief debate about where to search, Lara’s decision to head into the Triangle has immediate consequences as their ship is thrown into a storm and begins to break apart and sink… and the crew ends up on an island… scattered, leaving Lara to fend for herself.

The first hour or so of the game is little more than a movie where you are asked to occasionally press a button or guide Lara down a slide.  It’s not until the story establishes itself a bit that you begin to have full control and the ability to explore the game and it’s environment, which I believe to be the best aspect of the game.  Of course, there are other inhabitants of the island, and of course they are lead by a crazed madman intent on killing anyone who interferes, and of course everyone just wants to kill you… because… you know… you’re messing up the plan, or something like that.

When Lara arrives she is completely unprepared for the events that will follow… and we will follow her journey from naive academic to the badass, double pistol packing heroine everyone knows and loves.  But before we reach that pinnacle, we go from a young girl who is freaked out by a corpse, to someone who wants to retain her humanity and not become a murderer, to her first dramatic kill.  After that point she seems to take more of a “fuck it” attitude and racks up the kills like a seasoned pro.

The gameplay is very smooth… climbing, jumping, and combat are all well laid out with easy routes and an always available cheat in what they refer to as “survival mode”, which essentially highlights where you need to go and the best way of doing it.  My understanding is that previous games used puzzles for you to suss out prior to reaching the endpoint of a tomb… this is the case here as well, and I can’t say any of the puzzles were too difficult.  I’m sure serious gamers will not be pleased with how simple these puzzles are, but to a simpleton such as myself, I was grateful that I didn’t have to sit there stumped for hours and never had to resort to wiki-cheats to pass something.

I enjoyed the melee combat and the assortment of weapons you can mod and upgrade throughout the game, as well as gaining XP in order to bump up your skills, which you can assign as you earn.  Although the double pistol is her traditional weapon arrangement, that isn’t an option… but the “year of the bow” continues, and she is fantastic with a bow… and I am a fan… so that was fun.

It was almost impossible not to compare this game to Uncharted.  I’m not sure it would have been as easy for me to finish this if I hadn’t played Uncharted beforehand… the climbing, swinging, and gunplay were so similar that it felt like second nature picking the mechanics up for Tomb Raider.  The only thing missing was the sense of humor of Uncharted… and a lovable sidekick like Sully would have been very welcome… Lara can be a bit of a wet blanket at times, so serious.

The game is solely focused on Lara, but it’s the secondary characters, specifically her friend Sam, that propel much of the story.  This is fine… but none of the other characters are well fleshed out as individuals, so I can’t say I cared for any of their fates beyond how it would affect Lara, which is a shame.  Again, perhaps an extended prologue could have helped in that regard as well.

Visually, the game, and more importantly, the island is gorgeous.  I had a blast just running around the island and exploring every nook and cranny.  There is much to see, much to collect, and a whole wide array of micro-climates that had me scratching my head once I thought about the fact that I was just on a tropical beach… then a few minutes later I was up in a snow capped mountain temple… all while wearing the same tank top.  I guess jackets don’t sell video games… or maybe it was the dad in me wanting to yell at her for wearing such skimpy attire in such chilly weather.

Overall… great game.  Had a wonderful time playing it… didn’t take very long, but I enjoyed every minute.  If you want to shut down your brain for a while and just enjoy a rollicking good action-adventure, I imagine you could do a lot worse than Tomb Raider.  I can’t speak to it’s efficacy as a prequel or a reboot since I didn’t play any of the previous iterations (I believe this is the tenth official game, but first reboot), but for me, it was a well spent week.