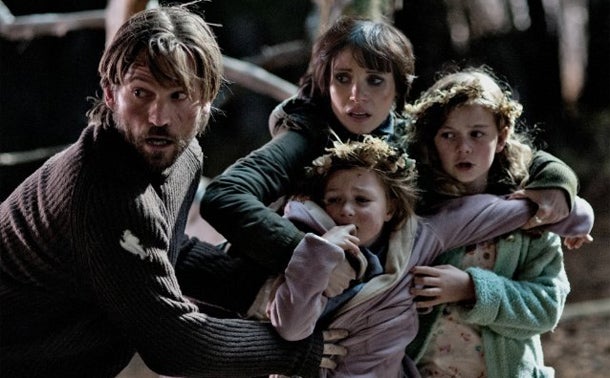 Mama is the second in my “saw this about two weeks ago and didn’t get around to writing anything about it” series… this time it wasn’t a case of not being able to get my head around it, it was more of that personal pit I found myself in recently.  Regardless, Mama is an interesting movie for a few reasons… not least of which is that I generally despise PG-13 horror movies (The AV Club wrote up a fantastic list of 8 PG-13 horror movies that are actually frightening… Mama is numero uno).  If a horror movie is considered OK for a 13 year old, what chance does it have of scaring an old horror die-hard such as myself?  The answer to that is, Mama creeped me out for sure… but didn’t really terrify me in the way I was hoping.

Side note:  My Life of Pi review was negative due to my expectations… is there a pattern forming with me this month?

Mama does a great job in setting up a creep-fest by the simple virtue of adding in a couple of freaky kids.  Strange children always make for some spooky plot devices, and these girls are adequately disarming.  Add to that a “monster” that they actually show and a number of CGI oddities (think of a full head of hair coming towards you on the floor), and you get a movie that does more than a fine job of delivering a number of jolts and squirm inducing moments.

The basic premise to Mama is that a big financial hot shot (Nicolaj Coster-Waldau… Jamie Lannister for all you Game of Thrones fans… who also plays his younger brother in this) goes nuts after the financial crisis of 2008 and murders his business partners and wife before absconding with his two young daughters, ages 3 and 1.  He ends up driving off the road in some snowy mountainous region and discovering a cabin deep in the woods.

Jump forward five years and we find his younger brother, Lucas (as I mentioned, Nicolaj Coster-Waldau… only this time he’s hip and has a beard), and Lucas’ punk-bassist girlfriend, Annabel (an almost unrecognizable Jessica Chastain), still searching for his brother and two young nieces.  After having squandered his life savings on the search, just as his final check has bounced, the girls are discovered in the same cabin… only now they are feral and walking on all fours as is the fashion these days in horror thanks to that glut of Japanese horror earlier in the last decade (looking at you Samara from The Ring).

At this point it’s basically horror-Nell.  One girl was old enough to still have retained some language, the other younger girl is completely feral and creepy.  Unfortunately, these young girls were kept alive for five years by someone… and that someone has followed them to their new home as well.  Yes… it’s Mama herself… and she gets pissed and jealous anytime someone shows affection for these girls.  As to why that is… you have to see the movie to get that aspect of the plot.

For the most part, I enjoyed this film.  There were a few moments where I was meant to start or jump and found myself chuckling instead… but there were other moments that got me squirming as was intended.  Considering that this was produced by Guillermo del Toro, it has a very del Toro feel to it… but not the masterful touch he would have brought to it had it been his film.

I appreciate the fact that we are introduced to the “monster” of Mama early and often, but there came a time towards the end where the novelty had run it’s course and I wanted resolution… and the actual ending left quite a bit to be desired as far as I’m concerned.  Plus, we get some very stupid behavior from a character who should have known better…. but I’ll leave that for you to discover.

The biggest complaint I have with Mama is the number of times Annabel and others refer to her being in a “rock band”.  I used to be in a number of bands, and never once did we, or anyone else, refer to it as a “rock back”.  It’s just a band, dammit.

I wouldn’t recommend running out to a theater to see this one… but when the DVD is released and/or it shows up on cable, this will be one to watch multiple times.  Mama has it’s creeps, but little else to hold it up.