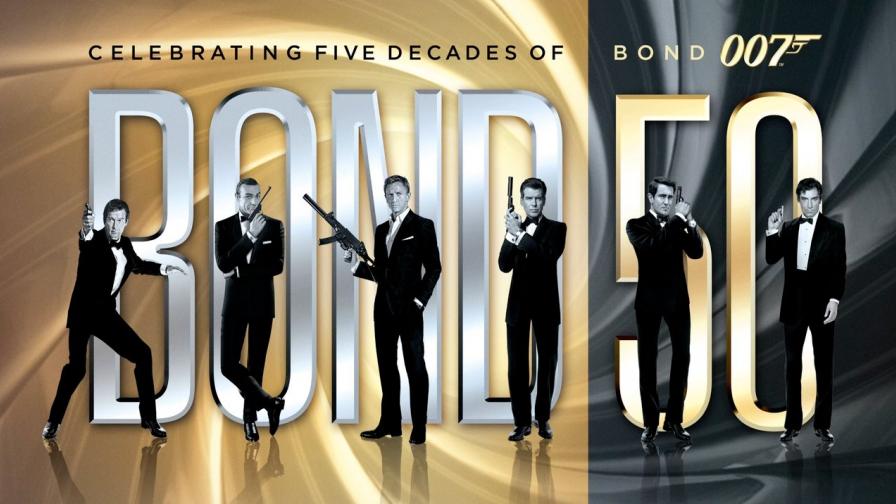 Welcome to the second part of my ongoing series detailing my experiences watching all 23 Bond films on Blu-ray, in order, with my ten year old daughter… and seeing what holds up well… and what does not.

Over the last week and a half we delved into what could only be considered the gold standard of the Bond franchise… Goldfinger, Thunderball, and You Only Live Twice… the final three Connery films in the series before he quit… and before he returned in the horrible Diamonds Are Forever… but that is a matter for part three of this series.

By most accounts, Goldfinger is the greatest bond film ever made.  I don’t agree, I give that to either Skyfall or Casino Royale, but there is no denying that Goldfinger has everything a Bond movie requires… a pair of great Bond girls, Jill Masterson (Shirley Eaton)… the golden girl, Pussy Galore (Honor Blackman), a great villain in Auric Goldfinger (Gert Frobe), the model henchman Odd Job (Harold Sakata), the Aston Martin DB5 in it’s first appearance outfitted with every spy gadget imaginable on a car… revolving plates, smoke screen, oil slick, bullet proof windows, blast shield, front mounted machine guns, and of course… the ejector seat… and a fantastic set piece, Fort Knox.  Mix these ingredients with a wry wit, great music, and some of the best action sequences at the time and you have one of the more enjoyable movie going experiences you can have.

How did my daughter see it?  There are five scenes in particular that caused comment, and I found myself cracking up with each observation.  First, the cold open before the credits… not only is Bond wearing a helmet with a duck on it as he infiltrates a party via the water, he strips off the wetsuit to reveal a wonderfully tailored tux underneath.  Mini-Blahg thought that was just fantastic and over the top in a lovable way… and she is beginning to see the pleasure of the cold open sequence.

When Bond is taken aboard Auric Goldfinger’s plane and we are introduced to his lovely pilot, Pussy Galore… she looked at me with raised eyebrows and simply said, “Pussy?  Galore?  Really?”  All I could muster was a meek little… “yeah… that’s her name”.

We all know the famous scene of Bond strapped to a table of gold and the laser making it’s way towards our hero’s jewels and the well trod line of, “Do you expect me to talk?”… “No Mr. Bond, I expect you to die.”  What we may not fully realize is how often, and in how many different genres and instances, this situation is spoofed, mocked, and made homage to until you hear a ten year old exclaim with joy at suddenly understanding where this image comes from.  She immediately rattled off a few shows, Phineus and Ferb being one of them, that reference this scene.  If there is any reason I make my kids watch old film and television, it is for this reason alone.  Success!

My favorite of her observations thus far comes when Pussy and her pilots gather.  “Why do they all have big hips, pointy boobs, blond hair, and all look like Barbies?”  I explained that that was the style at the time and what was considered sexy and desirable.  She remarked at how fake they all looked… I remarked at how perceptive she is.

Finally, I’m not sure if she knew of this trope prior to seeing this… but she asked at one point when Goldfinger was keeping Bond captive, “Why don’t they just kill him?”  I explained the reason as explained in the plot… but seriously, why don’t they just kill him?  In defense of the film vs. this particular trope, Goldfinger never just lays out his plan until much later… and Bond does have to parse it out over time via small clues.

One observation I did make over the course of these first five films that has more to do with our culture at the time… Sean Connery’s James Bond is a bit of a rapist.  He forces himself on these women who eventually succumb… but he is straight up raping some of these women, and sitting there with my ten year old daughter takes any perverse pleasure out of this display of masculinity and replaces it with a lecture on how no one should ever do that, and if they do… kick them in the balls.  I had a couple of conversations about this facet of the Bond canon and had someone point out that Roger Moore never has to force himself on anyone… I will be paying close attention.

Another Connery observation… for a sexy movie star, he is quite hairy… and in Blu-ray, you can see each and every back hair.  Personally, I don’t have an issue with this, I am not a smooth creature… but in terms of what is considered attractive in this modern era, I could easily see a more shallow and image conscious person finding this to be far from sexy.  I have my problem with this particular view… but that is for another post.

The Blu-ray transfer is amazing… a movie that I have seen countless times felt fresh and new seeing it in this format… and hearing Shirley Bassey’s belting out the title sequence was simply radiant.  Next year my daughter may be dressing in gold and singing Goldfinger for her school’s talent show… needless to say, she loved the movie.

Thunderball… a Bond movie so nice they had to make it twice!  The horrid non-canon Bond film Never Say Never Again was basically an updated version of Thunderball… but I’ll stick with the original.  This was a film that I considered to be one of the best for years… then I just watched it again.  Although the film looks amazing in this updated format, I realize that this movie commits one of the worst sins of any Bond film… it’s quite dull at times.

Although there is much to love about Thunderball; Domino (Claudine Auger) is a great Bond girl… Emilio Largo (Adolfo Celi) is a fantastic villain working as SPECTRE’s #2… seeing more of SPECTRE and Blofeld, specifically the electrocution in the chair and the subsequent dumping of the body under the floor as the chair rises back, another Austen Powers spoof… and the best cold open in the series up to this point… this is the film where Bond escapes with the aid of a jet pack… doesn’t get much better than that… unfortunately the filmmakers were in love with the latest technology, which at the time was underwater photography, and it exploited it to the point of boredom.

My understanding is that this was the first feature film to use extensive underwater camera work.  The Bond films were known for introducing the world to new tech, such as in Goldfinger… the laser, it was only a year or two past development and was more or less unknown to the general public, but by making a film around being underwater… not the best in terms of drama or action.  And having a complete underwater battle sequence as your main set piece means a lot of slow motion and nothing but gurgles and muffled “oofs” and “arghs”.  Sure it’s fun when Bond straps on his jet pack and cruises through this aquatic battle field ripping off masks and killing random dudes all willy nilly… but it goes on forever.

Sadly, I could barely keep my daughter’s attention with this one.  She asked to put it on, the excitement lingering from Goldfinger, but I had to keep trying to drag her back, eventually just finishing it on my own.  I do enjoy Thunderball for all the reasons I listed above, but I wouldn’t consider this one of Connery’s best.   I can understand why a remake would be considered… sadly, they remade it with an aging Connery and incorporated a video game into it… and there’s nothing worse than an aging hipster.

If Bond’s off hand remark regarding The Beatles in Goldfinger was an indicator that perhaps he wasn’t the definition of “cool” as the 60’s wore on, his treatment of Japanese culture in You Only Live Twice is a great indicator of how far we have come as a people in being more sensitive to racial and cultural differences.  I have always been a fan of You Only Live Twice, but I must admit, there are more than a few squirm inducing moments here.

Squirm inducing moment #1… Bond being “turned Japanese” and receiving a bath from four or five beautiful women.  As they giggle at his body hair he retorts, “Japanese proverb says that bird never makes nest in bare tree”… “Tee hee hee”… groan… Squirm inducing moment #2… Thinking that what they do to him makes him look Japanese in the least.

That said… You Only Live Twice has some of the best action sequences to date in any Bond film.  From the opening in space with the SPECTRE space craft cutting off the life line of a US astronaut and leaving him to float in the blackness to Bond’s apparent death in a Hong Kong bed to the eventual aerial battle and subsequent all out fight with ninjas in the greatest villain lair ever, the volcano base, this movie is a hoot from start to finish.  Plus, one of my all time favorite gadgets to come out of Q’s office… Little Nellie, the one man portable helicopter.  One of my favorite aerial battles ever on the big screen… four enemy copters, four different gadgets within Little Nellie to take out each baddie, from aerial mines to a flame thrower.

This film is also the first time we actually see and meet Ernst Stavro Blofeld as portrayed by Donald Pleasence, the quintessential Blofeld.  If there is any performance that informs the Austen Powers role of Dr. Evil, this is it… quirky and giddily malevolent, Blofeld’s escape from the volcano lair is classic Bond at it’s best.

You Only Live Twice also has one of my favorite throw away lines… after taking a swig of vodka after beating up a corporate tough guy in a business office, he grimaces, looks at the bottle and says, “Siamese vodka.”  It’s not the words… it’s the tone.  Connery at his best.

Three great movies, the pinnacle of the Bond franchise… and the end of the original Sean Connery era.  Although these are generally considered the best in the franchise, I’m now giving a great deal of attention to the eras in which they represent.  The next film, On Her Majesty’s Secret Service, was made in 1969, and begins to reflect more of a changing time.  These first five films range from 1962 to 1967… a period of incredible social upheaval and a changing of the guard not seen in generations.  How much did the films inform the times in which they came from… and how much did the times inform the films?

The 70’s will bring in all new challenges for everyone’s favorite British spy.  Mr. Bond and I will return with my reviews of On Her Majesty’s Secret Service and Connery’s final outing in Diamonds Are Forever…

No Mr. Blahg, I expect you to write…
Cornelius J. Blahg