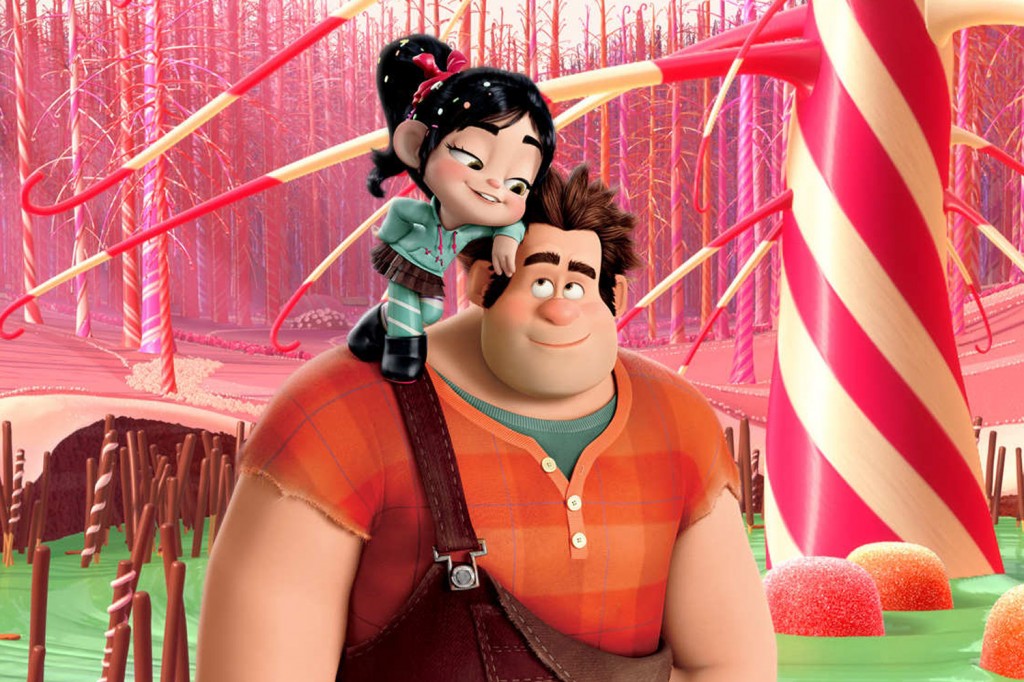 One of my favorite movie going experiences is when a film I had little desire to see turns out to fantastic.  Wreck-It Ralph is the perfect example of this phenomenon.  I’m not sure when they started showing the trailer for Wreck-It Ralph, but it felt like a million years as far as I was concerned… and I was happy to take my kids to see this for almost no other reason than knowing I wouldn’t have to see that same damned trailer again.  My concerns could not have been further from the truth… Wreck-It Ralph is one of the more genuinely wonderful films I have seen in quite some time.

If you think you understand what this movie is about, think again… the trailer and most reviews give you the plot in its’ most basic terms, but the story itself is so much more rich than I would have imagined it to be… and if you are of a certain age, this movie will play out as one long love story to video gaming over the last thirty years.

Like Toy Story, Wreck-It Ralph goes into the lives of video game characters when there are no people around to see them.  Although they are free to exit their games and mill about in their common surge protectors, Game Central Station, there are consequences to being outside as well as needing to ensure you are back in your game by the time the arcade opens.  Each character, while being true to their personalities in their respective games, are all fully realized… and each character is unique to their particular game’s history.  I suppose this is where knowledge of arcade games and their characters over the last thirty years comes in handy… sure, you don’t need to know who Q-bert is, but it helps to understand why he is homeless… when was the last time you saw a Q-bert game?

But being true to your character is exactly where the existential crisis lies in Wreck-It Ralph… in Ralph’s (John C. Reilly) world, he has been the Donkey Kong to Fix-It Felix Jr.’s Mario for thirty years.  Every day he has had to wreck the building while Felix (Jack McBrayer) comes in with his magic hammer and fixes the building causing the residents of said building to cheer and award Felix a medal each and every day… while Ralph gets thrown off the building and is forced to sleep in the dump, with a stump for a pillow and bricks for a blanket… day after day after day after day.  Ralph longs for something different… in fact, all he wants is a medal and a taste of cake, but nobody likes the bad guy… therefore, nobody likes Ralph.

The level of detail and imagination brought to this film make the first ten minutes or so an absolute feast of well laid out exposition and set-up for this digital world absolutely stunning.  From the difference between their pixelated selves on the game screen to the round CGI versions of the same character in their own world, although still maintaining the movement and language you would expect… whether it’s one of the Pac-Man ghosts or Bowser from the Mario games… I mean, Bowser does a spit take with fire balls, we are introduced to a fantastic world where a game’s environment and it’s characters are only a short distance apart via the electrical cord… which is where Ralph heads… into Game Central Station and into a new game… a game where he can get a medal… Hero’s Duty.

Hero’s Duty is a first person shooter that seems like a cross between Call of Duty and Starship Troopers… all violence and bombast as you make your way through a war-zone of alien insects in order to become the mightiest of soldiers… not a very comfortable place for an 80’s era 8 bit guy.  As Ralph enters into this world we are introduced to Sergeant Calhoun (Jane Lynch), a super tough, take no shit military commander who leads the player either to their death or onto victory… but Ralph is not the player… and he is not meant to be in this game… and accidents happen.

After getting what he came for, and a little something else as well, Ralph jumps into another game, Sugar Rush… a candy coated kart-racing game ruled by a seemingly benevolent monarch, King Candy (Alan Tudyk) and populated by a gaggle of sugar themed mean girls… and one obnoxious brat, Vanellope von Schweetz (Sarah Silverman).  From here, the movie finds it’s direction… or rather, one of them… because once you think you know what Wreck-It Ralph is actually about, it throws another wrench into the works and becomes something else.

I must give extra special credit to the casting for this movie… John C. Reilly as the sad sack villain and Sarah Silverman as the sharp tongued little glitch could not be more perfect for those roles… Alan Tudyk gives a performance to rival the Mad Hatter, and Jane Lynch as the bad ass Sergeant Calhoun?  Perfection.

Wreck-It Ralph is an incredibly rich and rewarding film that will manage to give you a number of belly laughs while tugging at your heart strings just enough to land an emotional punch in the end, and if you ever dropped a roll of quarters in an arcade when you were younger, that punch will hit you that much harder.  Wreck-It Ralph earned my tears and my laughter… and yes, I did in fact shed a tear or two… and chances are, you can’t even imagine how it got to that place… because whatever you think this is about, it’s not… it’s better.