The Walking Dead’s third episode of its’ third season, Walk With Me, informs me of one very important fact… I no longer have to make excuses for this show… I can completely endorse and recommend The Walking Dead as great TV.  Sure I’ve been a fan since day one, and fans are notorious for being apologists for otherwise crappy material, and I am definitely guilty of doing so in the past, but now… something has shifted… there has been a change… and with the third season now in full gear, I can say without a single caveat, The Walking Dead is worthy of your time.

I had the very distinct pleasure of being a guest on The Walking Dead’Cast with Jason and Karen last night in order to talk about our thoughts on Sunday’s episode, so I don’t think I will go into too much detail in this post… but for those of you not inclined to listening to podcasts, I will go ahead and talk about my takeaway from this episode.  For those of you so inclined to listening to podcasts, our talk can be downloaded from iTunes, found on Stitcher, simply downloaded directly from their website, walkingdeadcast.com, or easier still… follow this link.

From the very first frame to the final, Walk With Me is a completely different beast than any other episode that came before it.  For starters, our intrepid heroes that we have come to know and love and/or hate are nowhere to be found.  In fact, this is the first episode not to have Rick Grimes (Andrew Lincoln) in it at all… instead, we rejoin Andrea (Laurie Holden) and Michonne (Danai Gurira, who was finally given a name this week) as they wander aimlessly across the countryside with Michonne’s “pets”, the pair of de-mandibled, de-armed zombies she keeps chained up and uses as apparent pack mules.  Before we even seen them, we start with a scene inside a helicopter containing three military dudes.  What the what?  Other than a brief helicopter shot in the pilot and the second season finale, we have had no indication of any military presence in this f’ed up world, so it was quite a shock to see a scene like this… immediately followed by a very groovy copter crash into some trees.

Following the pillar of smoke coming off of the crashed copter, Andrea and Michonne head out to investigate… only to find some guy chopped in half from the rotors and an approaching group of trucks.  Holy crap… more survivors!  After some investigations on the part of the people who have shown up, and one of the more gruesome scenes of putting down a few zombies (one point for the knife through the top of the skull, another couple of points for the arrow kills, and many many points for the baseball bat to the noggin), Michonne’s pets begin drawing some unwanted attention… so she lops off their heads.  Unfortunately, they are found by none other than our old pal Merle (Michael Rooker).

Yes, Merle Dixon is back… our favorite drugged up, clap spreading, race baiting ass monkey has returned… and this time the writers have figured out how to not make him an absolutely one dimensional cartoon of every southern racist stereotype in existence.  Not to say that he isn’t still a prick, but now he is a more nuanced prick, and I couldn’t be happier.

Andrea and Michonne are then taken somewhere where they can get cleaned up a bit, some medicine into Andrea to deal with whatever virus is taking her down, some food in their bellies, and some beds to sleep in… we are then introduced to the leader of this new community… The Governor (David Morrissey).  For fans of the comic, The Governor is a known quantity… for those of you out there who don’t follow the books, I would love to know what your thoughts on this character are… at least when you first meet him.  By the end of this episode it must be somewhat clear that he is not really a great guy. 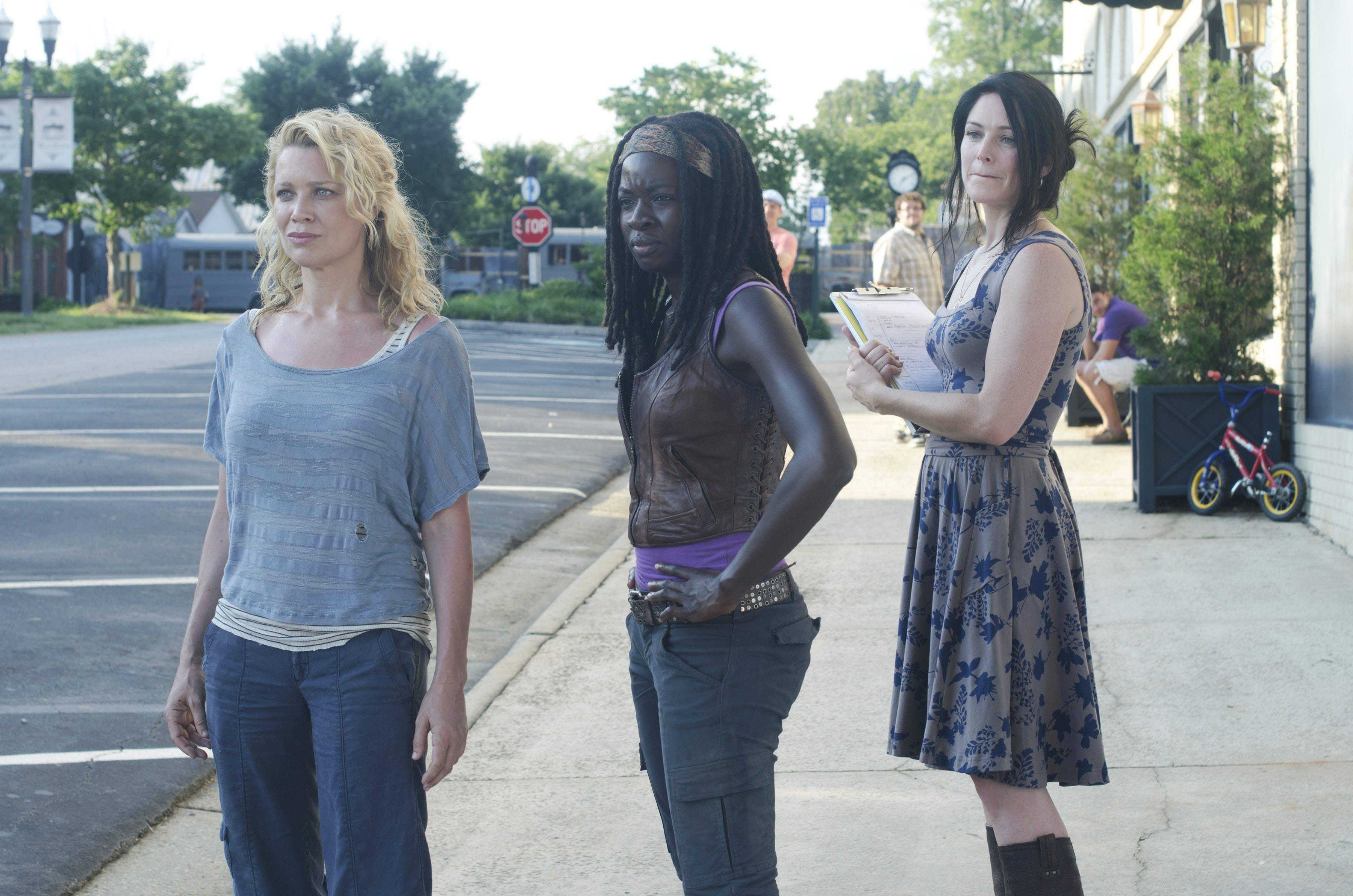 I’m going to truncate things a bit here… Andrea asks a lot of questions, Michonne wants her sword and to get the hell out of this town of Woodbury, there is a hot brunette (according to IMDB, she is Rowan, portrayed by Lindsay Abernathy, pic above) with a clipboard giving them a tour of the quaint little town in the middle of the zombie apocalypse… I have taken to calling her “Julie, your cruise director”… Merle is subservient to The Gov, and The Gov employs a bit of a crazy scientist fellow by the name of Milton (Dallas Roberts).  Although readers of the comic know about The Governor, these other elements are unknowns… and I can’t wait to see how this unfolds.

During this middle portion, we get some insight into Michonne… she is basically tight lipped and not interested in sticking around, and we see that Andrea is either; A) asking questions of The Gov in order to figure out what his game is… or B) horny and wanting some of that Governor’s lovin’.  Either way… Andrea seems to be up to something.  Also, Milton seems interested in understanding what makes zombies tick… Michonne’s pets in particular, so he and The Gov have a lovely breakfast with Andrea and Michonne (pic below, Milton on the right) where they all feel around the edges of each other doing their best to suss each other out… Michonne gives nothing away, Andrea holds nothing back.

Of the many events that occurred during the time I just glossed over, one very important thing occurs with the lone survivor from the helicopter… the pilot tells The Governor about where he came from and the group that is waiting for his return.  This sets up the final ten minutes… and what a final ten it is!

For the majority of Walk With Me, we are led to believe that The Governor is a good guy… when he arrives at the place the military guys are waiting for the copters’ return waving a white flag and getting them to drop their guard, and their weapons, he and his men take them all out and return to Woodbury spinning tales of how they were wiped out by zeds and fortunately for all of them, they now have their equipment… food, water, weapons, and ammo.  After a hard day of skull bashing (and drooling significantly while doing so) and lying to his citizenry, it’s time for The Gov to go home… walk by a naked Rowan sprawled out on his bed, look at a picture of what we must assume to be his wife and daughter, and have a seat with his glass of scotch… and gaze… gaze at his grotesque and macabre series of aquariums full of decapitated zombie heads… and a close up of Michonne’s pets head and the head of the helicopter pilot… his eyes still darting!

Holy shit what an ending!  If there was any doubt as to whether or not The Governor was a bad guy or not, that question should be erased from your mind.  Yes… he is one fucked up dude… and believe me when I say, he just gets worse.

I’m going to cut this short… but will continue on after the preview to discuss the comic and how it relates to this episode.  Overall… I loved this episode and am completely sold on season 3 and Glen Mazzara’s golden touch thus far.  If the quality of the show continues unabated, we are in for quite a treat.  Next week is rumored to be the best episode of the season… Killer Within… we’ll see about that… check back next week and find out!

In the meantime, while you are waiting for Sunday with bated breath, give a listen to The Walking Dead’Cast with Jason and Karen and join in on a great community… and satisfy your curiosity about what I sound like!  Then go ahead and leave a five star review in iTunes for them, because if you don’t, you may get infected… maybe not… but do you want to take that chance?

OK… I’m delving into spoiler territory for those who have not read the comic.  Warning… spoilers.

That episode was the episode us comic geeks have been waiting on… The Governor!  Did he live up to expectations?  I believe he exceeded expectations, largely because I had serious doubts.  My doubts were unfounded, David Morrissey may not look like The Gov we love to hate, but he sure has the menace.

I honestly did not expect to have The Governor go so bad so quickly in the show.  I anticipated a slow burn where we were left wondering… but Mazzara has said that the pace of the show will be breakneck, and he seems to be keeping true to that word.  Then again, he also said we would see more of a gradual darkening of the character… so much for gradual.

Expectations can be funny things… in that final scene, I saw something the first time I viewed the episode that I realized upon a second viewing was incorrect.  I mistook the naked beautiful woman in bed, Rowan, to be a chained young girl… that I imagined was Penny.  Yes… I simply saw something that wasn’t there and infused it with my own expectations… reminded me of the arguments over whether or not you see Michael Madsen cut off the cop’s ear in Reservoir Dogs (you don’t) or whether or not the top topples at the end of Inception (it doesn’t).  The only difference here is that I’m willing to say, “oops… I saw something that wasn’t there”.  What do you think… will Penny be included?

Another fun thing I noticed when searching IMDB for Rowan’s identity… one of The Gov’s henchmen is named Caesar Martinez… so he is present, along with Doc Stevens, although in the show, the good doctor is a woman.

Although the initial set up for Woodbury and The Governor storyline is tweaked, having Andrea and Michonne there first as opposed to Rick, Glenn, and Michonne, the basics all seem to be there.  I’m totally behind the idea of making The Gov less of a cartoonish villain and am looking forward to seeing how they play the rest of the arc out.  My biggest question… will The Gov, or Merle perhaps, take Rick’s hand… or will they abandon that storyline in order to not have to deal with constant CGI shots every time the main character is on screen?  I know Kirkman regrets taking his hand so early, or at all… but I think it’s part of what makes Rick who he is… and dammit, I want to see someone chop off Andrew Lincoln’s hand!!  (that’s not really true)

Does the show depict Michonne as we would like?  I think so… hard to tell so far… but comic Michonne certainly wasn’t (or isn’t) all smiles and joy… so the show version matches up quite well.  If anything, the nurturing of Andrea we saw in Seed seems more out of character than the stoic mute version we saw this week… and Andrea?  Well… she’s a wild card as far as comic vs. show.

I think that about does it this week… join me next week as I dig into Killer Within.  See you then…