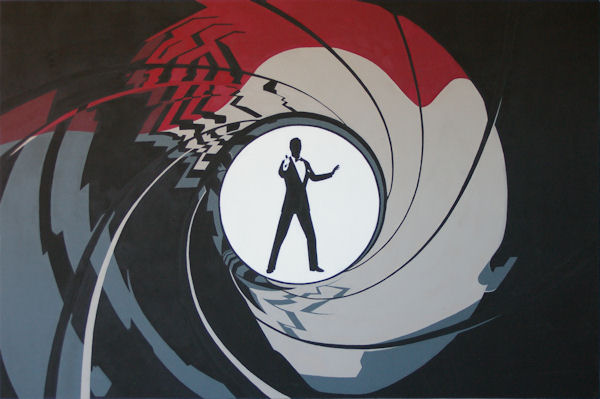 In honor of the upcoming release of Skyfall and this year being the 50th anniversary of the James Bond film franchise, I am going to break one of the initial rules I set for myself when I began this blog… no lists.  Although I get a kick out of many “best of” or “worst of” lists, I have always found it difficult to rank films, books, games, etc. in those terms because I tend to reside in a world of no absolutes and a more fluid belief in nuance and multiple perspectives.  Even having someone ask me a simple question of “what is your favorite movie?” or even “what is your favorite color?” can be enough to turn me into a babbling and blubbering idiot.

There is no single element that makes a great James Bond film… for that you need a winning combination of great villains, amazing set pieces, exotic locales, over the top action sequences, the most ridiculous and fun gadgets imaginable, an instantly recognizable Bond theme song, in addition to the classic 007 instrumental, and of course… the Bond girls.  With each Bond film we can expect a certain combination of all of those traits… and feel horribly let down when any single of these items is lacking.

That said… I have always had a soft spot in my heart for James Bond, so I offer to you my list of favorite Bond films… ranked from 001 (less preferred) to 007 (all time favorite), as I see it…

When the cold war ended one of the biggest questions facing the world was, “who would James Bond go against?”  This was one of the larger hurdles facing Brosnan’s predecessor, Timothy Dalton.  Goldeneye makes another MI6 agent, the renegade 006 (Sean Bean) the villain and introduces us to a new Bond (Pierce Brosnan) and a new M (Judi Dench)… all while bringing back some of the charm that was sadly missing during the late 80’s and early 90’s.  Plus, a Bond girl with the classically outrageous name of Xenia Onatopp who kills men with her thighs… what a way to go.

In Connery’s second outing as James Bond, the pieces were beginning to fall into place… but this is the film that most closely resembles Ian Fleming’s Bond.  The humor hasn’t come into the picture, the gadgets are not quite yet as technological silly as we’ve come to expect, the baddies are not as goofy… but From Russia with Love is probably the most accurate and realistic in terms of action and plot… he is trying to get his hands on a Soviet decoding machine known as the Lexicon, all while being hunted by S.P.E.C.T.R.E. agents Klebb, with the greatest poison tipped shoe, and Grant, an incredibly menacing Robert Shaw.  A spy movie first and foremost, From Russia with Love is one of the greatest early classics.

In Connery’s fifth film as 007 he is working towards averting all out war between the Soviet Union and the United States due to a missing space capsule.  Who is behind the missing capsule and how can Bond infiltrate the bad guy before the world is destroyed?  To do this, Bond first fakes his own death then travels to Japan where he goes undercover as… wait for it… a Japanese man.  By today’s standard, this film is outright racist and could be considered offensive… the scene of Bond adding make up, a wig, and eye prostheses in order to appear more “oriental”, followed by being bathed by two lovely young women who giggle at all of his body hair, only to reply, “bird doesn’t make nest in bare tree”, could be enough to turn off anyone with any sense of decency… but how can you resist the amazing volcano lair set piece (probably the most parodied of all evil lairs), the awesome Little Nellie personal helicopter, and one of the best Blofelds ever.

The Spy Who Loved Me may be the one Bond film that truly has it all… every piece of the Bond puzzle is present and represented in near perfection… and it is the first introduction of one of the greatest henchmen ever, Jaws… the metal mouthed giant of a man who eventually finds redemption and love in Moonraker… but is nothing but pure mute terror in this film.  A pair of nuclear submarines have gone missing and Bond must work with Soviet Agent XXX to uncover this plot.  In order to accomplish this task, Bond must fight his way through an awesome watery lair and employs the now classic submarine Lotus.  Although Roger Moore’s wit was a bit clownish in comparison to his predecessor, he was the perfect Bond for the time… and the Bond that I first knew and loved.

005:  On Her Majesty’s Secret Service 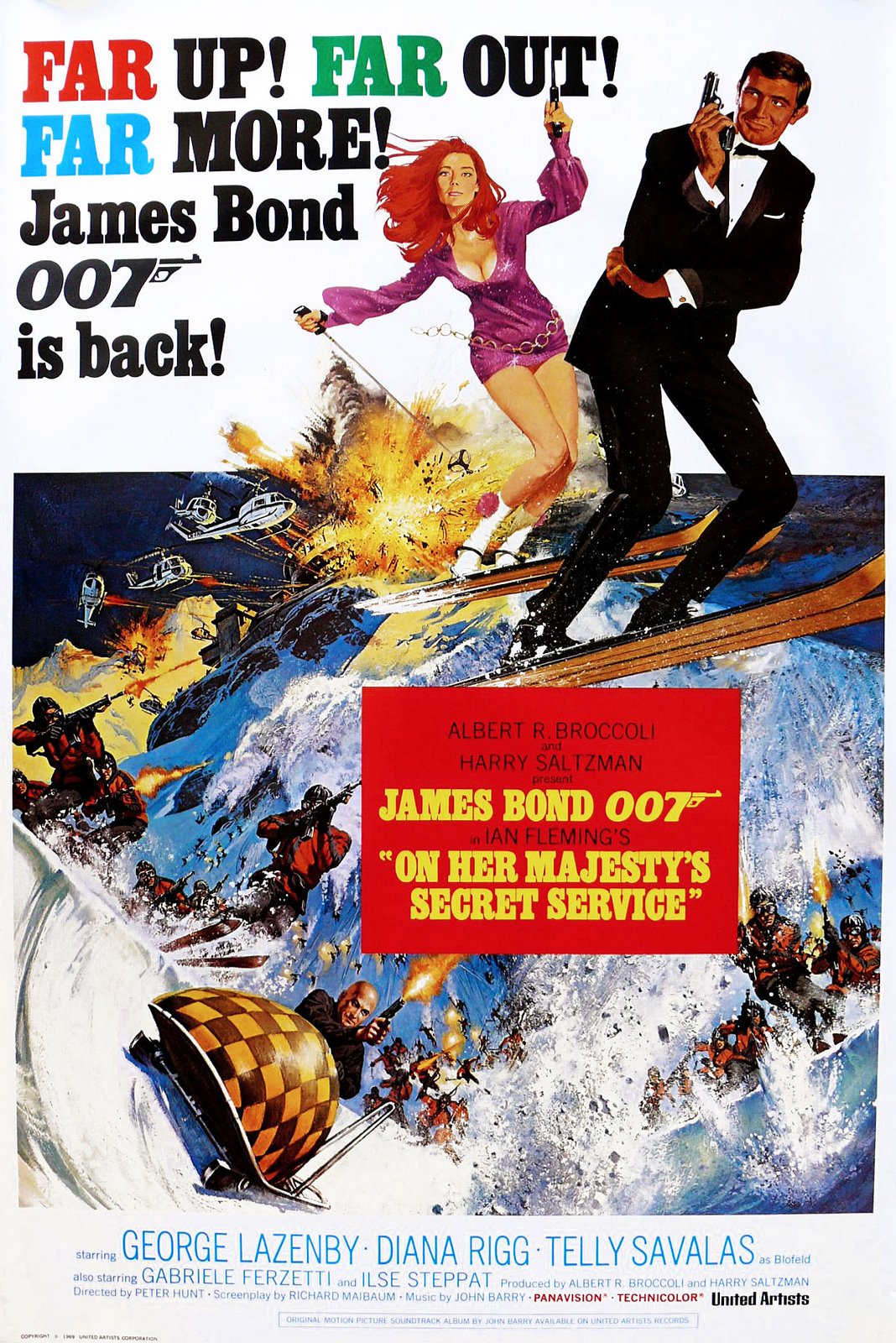 Possibly the most unfairly maligned Bond film, as well as the most maligned Bond, On Her Majesty’s Secret Service is one of the finest in the series.  After five films with Connery in the tuxedo, he had decided to hang his Walther PPK and pass the gadgets to another actor.  Eventually the producers decided on Australian model George Lazenby, and very few people were willing to accept this man as Bond, which led to Connery’s disastrous return in Diamonds are Forever.  Pity… because Lazenby gives the most nuanced and emotional portrayal to date.  On Her Majesty’s Secret Service shows Bond falling in love and eventually marrying… that’s right… marrying his feminine equal.  The plot involves a dastardly plan by Blofeld to use his “Angels of Death”, a group of ten beautiful women, to engage in bacterial warfare around the world… but it is the romantic angle that makes this Bond film my third favorite in the series… and it is her subsequent murder that fuels Bond’s rage and informs his character more than any other event that we have previously seen.

The only controversy concerning this pick is, how the hell is Goldfinger not #1… or, in this case, 007?  Granted… this is an amazing film… in the third film of the Bond series Connery has finally found his groove… he is charming, witty, gets the ladies, defeats the bad guys, and delivers some of the more iconic lines of dialogue ever uttered on the silver screen… not to mention the image of a dead girl covered from head to toe in gold paint and the greatest Bond car ever, the Aston Martin DB5, complete with smoke screen and revolving license plates!  If there were a template for a Bond film, Goldfinger would be it.  I would go so far as to say that every Bond film since Goldfinger has been playing a game of catch-up ever since.  This film also introduced the idea of the henchman with an eccentric mode of attack, Odd Job and his deadly bowler hat.  The plot is remarkably simple, Goldfinger loves gold… he decides to set off a nuclear device inside Fort Knox, thus rendering the world’s largest supply of gold to be untouchable and useless and therefore making his rather large reserves worth much much more.  If I had made this list ten years ago, Goldfinger would be at the top… no question… but there’s a new Bond in town these days… After 19 films spanning over forty years, Casino Royale did something quite remarkable… they hit the reset button and rebooted the entire franchise.  This was a risky decision, but a decision that, in my opinion, paid off big.  Casting Daniel Craig, a relatively unknown actor, who looked nothing like the James Bond we had all come to know and love… blue eyes, blonde hair, almost 6’… but not quite, was controversial to say the least.  At the time of the announcement I had extremely dubious expectations and had all but given up on the franchise for never having found its’ footing in the post Cold War era.  Then I watched Layer Cake, a small British film starring Mr. Craig, and immediately felt my concern wane and my excitement build.  The night Casino Royale was released, Mrs. Blahg and I walked out of that theater, I turned to her and said, “Sean Connery who?”  Casino Royale had done the impossible… it manages to not just reboot the franchise, but redefines James Bond for the 20th century.  By seeing the beginning of his career in MI6, we are able to get more of a feel for what makes this man tick… what his motivations are… and we see the ruthless killer behind the license to kill.  There are no jokes, no winks, and still no martini, shaken not stirred… but the template is there… and there is love to be found in Vesper Lynd.  Yes, this is the second Bond film to have 007 not just bed his leading lady, but fall in love… and as it must be for James, lose the girl… thus becoming a bridge between the Bond of On Her Majesty’s Secret Service and the classic model Bond of Goldfinger.  Although Craig’s Bond has not won everyone over, his portrayal feels correct and fitting for our times… and Eva Green, being a stunningly beautiful woman, seems a perfect match for this new Bond… together with a new Felix Leiter (Jeffrey Wright), a blood weeping baddie, and the return of Judi Dench’s M, Casino Royale is the most kinetic, most exciting, and one of the more romantic of all films in the 007 canon… which considering the fact that much of the action takes place while sitting around a poker table is impressive.

Hopefully you’ve enjoyed my list of top 7 Bond films… I must admit I had fun putting this together.  Perhaps I will have to lift my ban on lists and think of something else.  I realize that I included no Timothy Dalton films, and only one Roger Moore, but it was difficult to narrow a list of 22 films down to 7. I would suggest investing in the recent release of all films on Blu-ray for the first time together in one box set. it’s quite a stunning collection (I haven’t purchased it yet… but I will). In the meantime, tell me what your top Bond films are… and keep reading for my upcoming review of Skyfall.