Apparently mining the 80’s for remakes and reboots has become quite the cottage industry the last few years.  Today deadline.com announced the return of Conan the Barbarian… but this time Arnold Schwarzenegger will don his skins and swords again and return to the role that launched his film career and will make good on the promise of what could have been… which would have been a good Conan movie.  We haven’t seen one of those since the original 1982 film.

Conan holds a very special place in my heart.  It was the first R rated film that my dad took me to see when I was 10 years old… that was when he told me I didn’t have to close my eyes when there were boobs on screen… that was an epic day.  When I met Mrs. Blahg, we immediately bonded over our mutual love of the Schwarzenegger film and its’ fantastic dialogue such as; “Krom”, “two snakes, coming together”, and the classic “To crush your enemies, to see them driven before you, and to hear the lamentations of the wymen” (for those of you unfamiliar with the wisdom of Conan, that last line is his description of the three greatest things in life).  To top it all off… the first cat I had the pleasure to call my own when I moved to San Francisco was named Conan due to his absolute awesome size and musculature… and the fact that Mrs. Blahg and I dug Conan… and the fact that that cat was cooler than shit (RIP Conan 1992 – 2007).

The idea behind this sequel was teased in the final moments of the original film… we see an aged Conan sitting upon his throne as king… and the narration tells us of his greatness… but that was for another story.  It appears that now Arnold is in need of another career after his previous three (bodybuilder, actor (?), politician) have concluded… or rather, one took a break and is now returning… and is now sufficiently old, yet still muscled and covered in creepy steroidal veins.  Honestly… I’m rather excited about this.  The first sequel, 1984’s Conan the Destroyer, sucked ass… the Jason Momoa reboot was a pile of dicks… perhaps going back to the original promise can be a good idea… perhaps not. 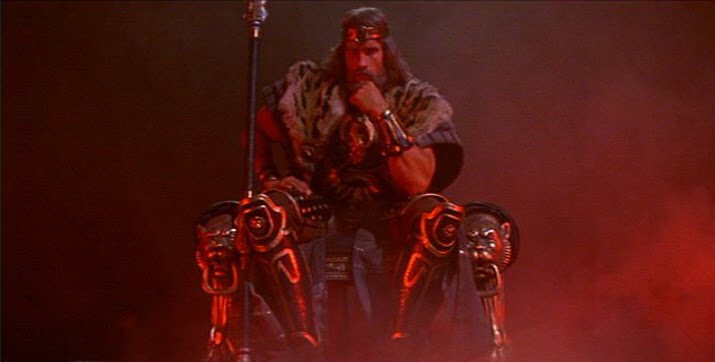 Fredrik Malmberg of Paradox Entertainment, the production company that holds the rights to Conan, said this:

The original ended with Arnold on the throne as a seasoned warrior, and this is the take of the film we will make, Malmberg told me. Its that Nordic Viking mythic guy who has played the role of king, warrior, soldier and mercenary, and who has bedded more women than anyone, nearing the last cycle of his life. He knows hell be going to Valhalla, and wants to go out with a good battle.

After the original seminal movie, all that came after looked silly to me, Morgan said. Robert E. Howards mythology and some great philosophy from Nietzsche to Atilla the Hun was layered in the original film. People say, he didnt speak for the first 20 minutes of the film, but that was calculated in depicting this man who takes control of life with his own hand. This movie picks up Conan where Arnold is now in his life, and we will be able to use the fact that he has aged in this story. I love the property of Conan so much that I wouldnt touch it unless we came up with something worthy. We think this is a worthy successor to the original film. Think of this as Conans Unforgiven.

Arnold had this bit of generic dribble to say:

I always loved the Conan character and Im honored to be asked to step into the role once again. I cant wait to work with Universal and the great team of Fredrik Malmberg and Chris Morgan to develop the next step of this truly epic story.

It is very possible that this can go bad very quickly… then again, it could be completely fucking awesome.  I just wonder how they will deal with all that weird plastic surgery Schwarzenegger has had.  I never imagined Conan as having strange Corinthian leather for a face.