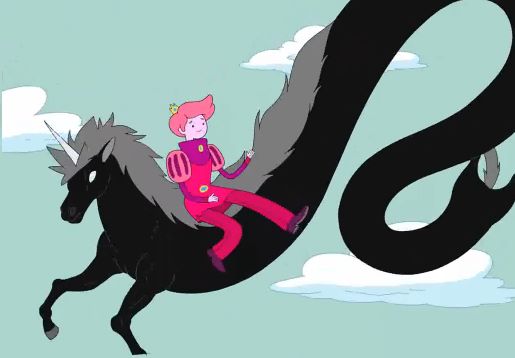 Greetings readers long time no see.  Yes, yet again, I have dropped the ball on my blogging duties and have utterly ignored my own little slice of the interwebs real estate.  I have been busy, distracted, unmotivated to write and highly motivated to pull my head out of the asshole of technology and interact with the real world as we know it.  Perhaps another recap of the last month and a half is in order

The holidays were fraught with activity shopping, parents visiting, kids vacation, my week off, Christmas, New Years, in-laws, parties and luncheons.  Most things went off without a hitch and overall, the holidays treated me well.  Mrs. Blahg and the kids came up with the most creative and wonderful gift for yours truly, a handmade body pillow in the form of Lord Monochromicorn (its an Adventure Time thing look it up… pic is above) as for the significance of this gift, thats another story for another time plus a couple of games for the PS3 (more on that later).  In my week off, I never actually had any time to myself but it was a pleasure to spend nine days not worrying about coming into work and allowing me some time to recharge and clear the mind of some cobwebs.

Best of all, is the New Years Miracle waking up January 1st with no hangover.  Mrs. Blahg and I did not go out and whoop it up instead, we stayed in and whooped it up which was perfect.  And to wake up the following day with no hangover was the sign I needed 2012 is going to be a great year and although I never make resolutions, I took the opportunity to pick my self up by the bootstraps and proclaim that I will not spend the year doing nothing in the hopes of finding relaxation on the couch and instead will get out into the world and relax by doing more more activities with the kids, more hiking, more outdoorsy crap that I love so much yet have allowed to go the wayside in my daily life, more blogging as I had originally intended (more weekly as opposed to the current monthly) basically, more present and assertive in what I really want to get done, and ultimately, do it.

So allow me to present a recap of the movies, books and video games that I have been delving into

Believe it or not, since I saw Hugo back in December, I have only seen one other film in the theaters The Adventures of TinTin.  I loved it.  All of the Indiana Jones comparisons are apt, yet this is very much its own thing.  Pure adventure of the highest caliber and a wonderful 3D experience.

There are a handful of films I want to see nay, MUST see The Descendants, The Artist and The Girl with the Dragon Tattoo (had a wonderful argument with someone regarding remakes and by wonderful I mean really fucking annoying) being chief among them.  During my week off, Mrs. Blahg prodded me to see Dragon Tattoo a number of times but the days were nice, and the idea of heading into a darkened theater to watch a story that I have read and seen at least twice before in the form of the original Swedish film, knowing how dark and anal-rapey the story is didnt really get me excited.  Ill get around to it.

Fortunately, 2012 looks to be an exciting year for film… The Hunger Games, The Dark Knight Rises, Prometheus, The Avengers, Brave and many others.  I cant wait.

After the doldrums of rereading a number of old comics and fluffy books, I got myself a novel by Philip K. Dick that I hadnt read The Man in the High Castle.  Fantastic speculative science fiction about the world as it would be had the Nazis and Japanese won World War II.  Thought provoking and an enjoyable mind fuck.

I have since purchased PKDs Ubik and am looking forward to diving into that one.

OK this is still my rabbit hole of unholy doom.  I spent an inordinate amount of time playing Skyrim over the holidays.  It got to the point where I realized I wanted to simply finish the main quest and take a break, knowing I could spend years bogged down in the details and intricacies of this wonderful game.

A couple of weeks ago I did just that finished the main quest and set the controller down for a little over a week.  No games just life.  More dishes were done, better meals prepared, more laundry cleaned and more opportunities for my kids to play their new game, Skylanders.  Great for kids, horrible for adults and their pocketbooks.  I will review this eventually.

After my week off from the PS3, I cracked open Uncharted 3: Drakes Deception.  In the words of my nine year old That. Was. EPIC!!  I had more fun in the 12 hours it took to complete Uncharted 3 than I did in the last year combined.  Pure adrenaline and joy.  Both kids and I found ourselves laughing, hooting, yelling, screaming and obsessing over this fantastic story.

Yesterday I had a good chuckle with the kids looking over the hours spent on each of the four games I have played since September when I got the PS3, specifically to play Dead Island and to have a Blu-ray player:  Dead Island ~34 hours, Red Dead Redemption ~24 hours, Uncharted 3: Drakes Deception ~12 hours, Skyrim (ahem) ~80+ hours, with many more to come.  Sad.

Next up:  Batman: Arkham Asylum then the first two Uncharted games.

The Republican debates and primaries have been an utter disaster for humanity.  Newt Gingrich… really?  Why are people so shitty? thats all I can say to that.

What else is there?  Looking forward to The Walking Dead returning on AMC February 12th loving New Girl and Raising Hope, two funny shows a big nod to the character Schmidt on New Girl Game of Thrones on HBO will be returning April 1st.  I never found anyone willing to do a GoT podcast with me, but I may be appearing on another podcast to discuss the upcoming season, more on that when details are hammered out (yes, my first guest spot Im thrilled beyond belief).

Coachella how could I forget.  Mrs. Blahg picked up a pair of tickets for the first weekend way back on Fathers Day.  We were waiting to see the lineup before deciding whether or not to go or to scalp the tix for profit.  Now that Radiohead is confirmed, Im going.  Im sure I will be writing something about that in the future.  Also, either Comic-Con or Wonder-Con Im going to take my girls for some nerdtastic fun.

Like everyone, I have no idea what 2012 will bring.  I dont believe in any end of the world crapola instead, I have a wonderful feeling about the year to come.  Perhaps I will find my blogging rhythm again perhaps Ill unplug for good (very doubtful).  Ive had a wonderful break from obsession with pop culture, and Im thrilled and re-energized.

As always, Id love some feedback (email me at mrblahg@mrblahg.com) and to chat it up with my readers are you following me on Twitter (@mrblahg)?  Are you a fan on Facebook?  Will I reengage The Mr. Blahgcast in 2012?  Probably.  Look for more well talk soon