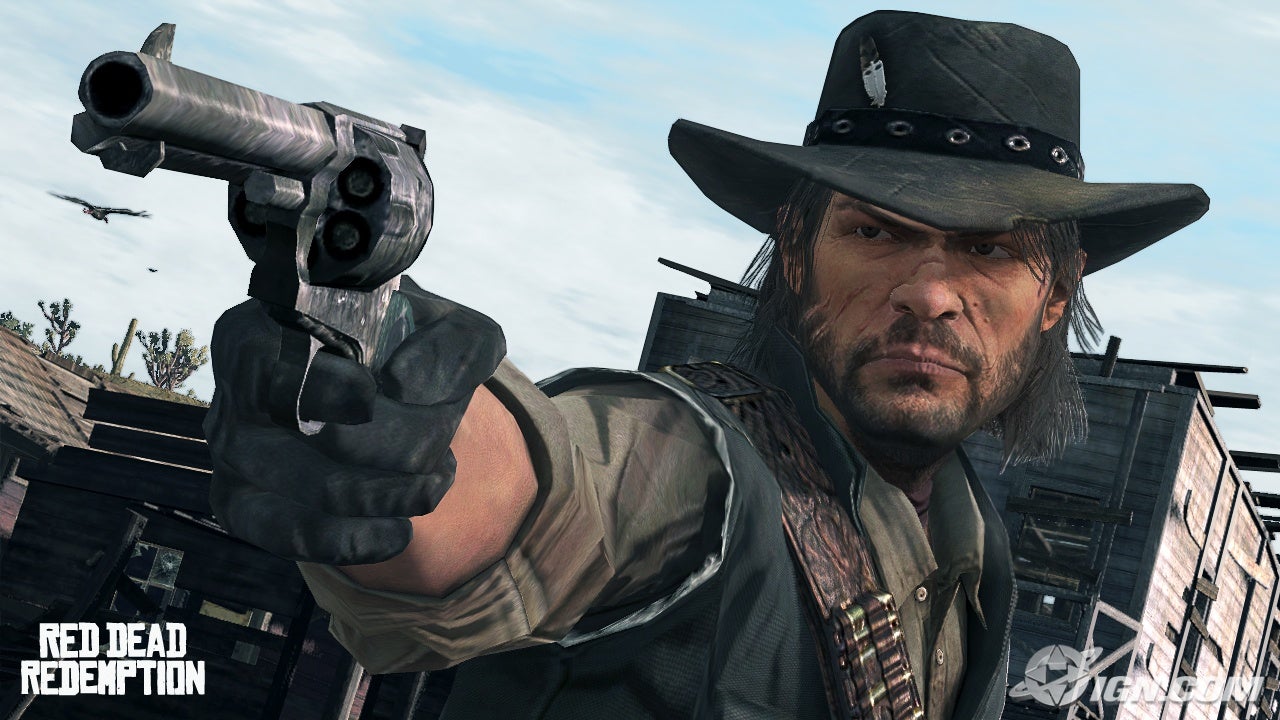 So far, the two previous game reviews I have written have begun in almost the exact same way an explanation as to how I am not a gamer.  After completing Red Dead Redemption, 2010s Game of the Year by most accounts, all I can think is, if loving you is wrong I dont want to be right.  Regardless of my gaming prowess, like pornography and steampunk, I may not know what it is, but I know it when I see it and that is how I feel about this remarkable and spectacular game.  I may not know what makes a classic video game, but I know I just played one.

The first day after completing Dead Island, I was prepared for a different direction.  I had had enough skull bashing and entrails to last me a while and was looking forward to a nice western.  I had known about the amazing scenery, the beautiful landscapes, the large open world what I hadnt anticipated was the gripping and engrossing story.

John Marston is a bad, bad man.  He once ran with a gang, robbing banks and killing folks just for looking at him the wrong way until he met a woman, and his gang left him for dead in a botched bank job.  Fifteen years later, the government has taken his wife and son hostage and are willing to strike a deal with Marston he goes out and captures or kills his old gang members and he can have his wife and son back.  That is the set up.

That first day I played for about an hour and I imagine about 45 minutes of that hour was nothing but watching the story play out like a movie.  John goes to confront his gang, they shoot him leave him for dead, again.  He is rescued and nursed to health by a lovely young rancher named Bonnie and the game begins.

One of the benefits a game like this has over something like Dead Island is that, although it is rated M for adults thanks to language, violence, drug and sexual references, etc., at least it isnt gory and frightening so I was able to let the kids watch me play.  Yes, there were more than a few moments I regretted that decision the language became very salty and lines like theres nothing I hate more than a dry pecker coming from a prostitute made me more uncomfortable than anything else, at least this did not induce nightmares.  Quite the opposite they wouldnt leave me alone about playing.  Every day we had to play at least a little and along the way they would name my horses and give me advice and guidance over what to do next.  Now thats what I call some quality father/daughter time!

Visually, I was taken aback right out of the gate.  Game controls are fantastic, once I got the hang of it and riding my horse was hilarious at first again, until I got the hang of it.  As I mentioned before, the landscape is amazing.  Bristling with wildlife and expanding vistas, the sound of a horses hoof on a packed dirt trail and the sight of dust being kicked up brought me back to any number of trails Ive been on, and so help me, I could smell the dirt and the pine and manzanita.  The sight of a bird or deer startled by my passing as it runs out in front of my horse is something to behold.  The passage of time as the sun sets and rises the passing of weather the beauty of puddles evaporating on the plains.  But the one aspect of the game that piqued my interest more than anything else is how the idea of leveling up is dealt with.

Instead of any particular levels, we get two different scales fame and honor.  With fame, you begin as a nobody and work your way up to legend.  With honor, you begin as a drifter and can either move up to hero, or down to outlaw.  Depending on how you behave in the game, your honor and fame go up and down accordingly.  Therefore, you can be the bad guy and have the law and bounty hunters going after you or as I did, going for the Legendary Hero status.  This was where having my girls at my side helped I was able to ask them how I should play and to show them that not all video games involve having to kill everyone.  Sure I killed my fair share of bandits and outlaws and the occasional bystander but I never meant to be the bad guy and I ended on a great note.

I haven’t mentioned the music yet… pitch perfect.  There are moments as you are coming closer to a bounty or a gang hideout when the music kicks in and amps the excitement up more than a few notches.  At other times, the music is mellow and easy as you ride across the stunning landscape.  In Mexico I was a bit thrown off by what sounds to be a nice little jazz number… but overall, a phenomenal soundtrack which only help to amplify the atmosphere and place you that much more into the story.

I cant call the game difficult.  Although there are a number of challenges and the main story line leads to some challenging moments where I would die a few times before understanding what I had to do, at no point did I ever feel frustrated with the need to start over or scrap it all.  In one rather long stretch in Mexico the story begins to feel a bit worn thin and you really want to get to point, but that sojourn ends in a very satisfying way and spurns you on to complete the story.

I dont imagine there is much more to say about this game that hasnt already been said.  Highly praised and considered one of the all time greats in the pantheon of great video games.  The day I bought my PS3 I got this and Dead Island.  Dead Island was what drew me in, but I was aware of Red Dead Redemption to the point that I realized it was a must play game.  That was the best decision I have made in a while.

I will finish with this if you have played the game, you are aware of how it ends.  All I will say regarding the end is this my youngest daughter cried out loud, and my eldest cried and was choked up for two days while searching for any and all information about John Marston and the potential for a sequel online.  They were affected and not in a bad way but affected by the story.  By the power of a great tale.  THAT is what Red Dead Redemption offers, and THAT is what sets this game apart from others.