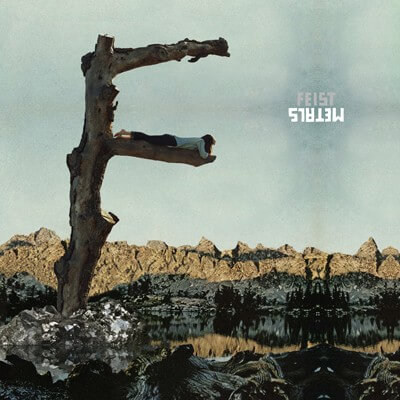 Chances are, if you hear the word Feist you will have one of three reactions; oh yeah, the 1-2-3-4 singer from the iPod commercial I hate her or, I love her (properly, the band is Feist, she is Leslie Feist but for purposes of this review, she and they are one and the same).  I am firmly in the latter category, and the majority of people I know are one of the other two.  This fact lead me, for the first time, to attend a concert alone.  That concert was in support of her 2007 sleeper hit, The Reminder four years later, Feist has finally released new material, Metals.

Pitchfork, in its review of Metals, says it feels like such a refreshing and slyly badass statement of artistic integrity.  Honestly, when I heard that, I had no clue what that meant.  After listening to the album a few times I get it.  If you expected her third album to elaborate on the success that was had with her more poppy pieces, whether it was 1-2-3-4, I Feel it All or Mushaboom from her debut album, Let it Die, then you will be surprised to hear that Feist has firmly, and I would say fiercely, imbedded her feet into the more folk/avant garde aspect of her music at times dipping her toe into what sound like work songs or chants and completely eschewing pop in favor of something as inaccessible as it is gorgeous and beautiful.

Recorded in February of this year, Feist left the comforts of her native Canada to finish the album in a barn tucked into the forests of Big Sur, California.  I dont know if that is because of the areas rich literary history being the former home of Henry Miller (and the home of the Henry Miller Memorial Library, which if you are 18 and driving north in the rain and stop in at, you will never quite forget it), the well known hippiesque vibe of the region, or the need for solitude but the tracks were laid down, and with very little production, Metals was born.

Delving into a broken relationship, the album opens with The Bad in Each Other a song about good people bringing out the worst in each other.  Stripped, bare, raw three words that not only describe this song, but the album as a whole.  I believe the high point of the album to be the first track that is not to say the rest is anything but remarkable but there is a particular energy trapped in the pounding drums that open this piece that drew me in immediately.

Followed by Graveyard then Caught a Long Wind two slower pieces very reminiscent of her earlier more thoughtful works.  The fourth track, How Come You Never Go There, the first single from the album (video from her Letterman appearance below) finds Miss Feist in an almost pleading mode as horns enter and punctuate the chorus.  The power within this track is subtle and didnt become apparent on my first listen but has been growing gradually for me.

Its that subtlety that is drawing me in further and further with this album.  I barely noticed the introduction of strings in addition to the horns to the occasional backing vocal and those vocals, strings and horns all colluding in the fifth track, A Commotion.  The sixth song, The Circle Married the Line, a story of a woman coming to terms with the end of a relationship.  These two songs represent what will probably be the more commercial singles from the album, and possibly the ninth track, Undiscovered First, which finds the build up with instrumentation driving this particular piece forward.

A word about the inaccessibility of the album it is not a difficult album to listen to, in fact, this will be a perfect album for dinner parties, intimate occasions, etc.  By inaccessible I mean it doesnt, at first listen, have much in the way of commercial appeal there will be no club mixes, no iPod ads, no Muppet appearances but I can imagine a number of these tracks playing during a montage sequence or punctuating a emotional moment.

Punctuation seems to be another way of looking at the album.  Very few exclamation points but plenty of semi-colons, commas and ellipses.  Many of the other tracks follow a more similar pattern quiet guitar, light flange light chorus all bound together with a voice so unique and ethereal I barely register any words the first few times I listen to it.  Specifically, her voice drives Anti-Pioneer, the closest to a dirge, mournful and filled with sorrow slow plodding drum and a guitar that sounds alive in an empty room

Overall, I am enjoying the album more and more with each listen.  Unlike her previous albums, Metals feels focused.  Whereas Let it Die and The Reminder bounced between moods, genres and styles, this album is firmly planted in one mindset.  I admit, I would have liked to hear the more upbeat and peppy Feist but if that is not where she is in her life at the moment, I am pleased to occupy the space she is willing to share.

When I saw her perform a few years ago, I was struck by her easy going attitude, by her eagerness to perform and to transform a basic concert into an artistic experience Im curious what a couple of months in Big Sur and change in life will bring to her live presentation.  Will it be a more somber experience, will she bring some joy, will she get annoyed at people brandishing their iPods and waving them as though she were playing Freebird and that was their lighter?  Ill let you know in mid-November until then if Feist is your cup of tea, I couldnt recommend Metals more.