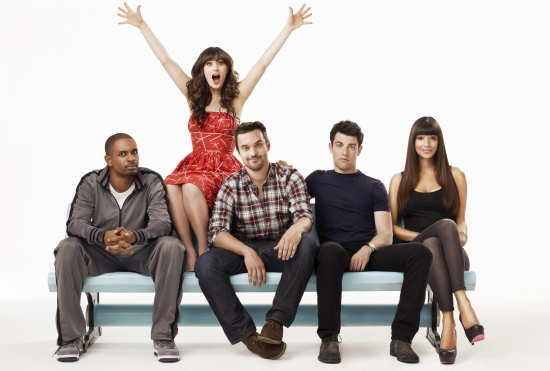 Last night I found myself in a surprising position sitting in front of the television with no one fighting for the remote and new programming available for me to watch.  Seeing how I do tend to read entertainment news and there is no way in hell anyone could have avoided the ridiculous yellow billboards with Zooey Deschanels face and the lamest tag line ever adorkable, I suddenly found myself at the right place at the right time and decided, what the hell, lets watch New Girl and see if it is as good as many have been saying it is and whether or not my transition from being smitten with Zooey D. to my annoyance with her is justified.

By the finish of last nights pilot episode I still found myself somewhat confused and slightly annoyed at the premise that Jess, Miss Deschanels character, is so awkward and goofy that she cant find a date.  After years of watching various hipster and nerdy guys drool and lose composure at the very mention of her name (myself included) and after years of reading hundreds of articles extolling the virtues of her big blue eyes, quirky (remember this word, it will be repeated often) clothing choices, random career directions, Ben Gibbard wife-dom and bangs that scream Im an indie blow up doll, I just cant buy that she has any problem finding a guy especially the notion that after telling a dude that she needs break up sex he would be bothered by seven texts from her.  For casual sex with Zooey Deschanel I would imagine most men would not be that picky as to ditch her because of a few text messages of course, that may just be me.

I missed the first few minutes, so I think I missed the actual set up and premise (and as I understand, her dancing naked), but it seems that after a bad break up with her boyfriend she is now having to live with three guys Schmidt (Max Greenfield), who thinks he is buff and seems to be the most bro-ed out.  The roommates have a douchebag jar for him to fill with a dollar whenever he is being douchey.  There are many bills in that jar.  Coach (Damon Wayans Jr.), who doesnt know how to talk with women without yelling at them and being a prick and Nick (Jake Johnson), who is a bartender I dont know much more about him beyond the fact that he broke up with a girl six months previous and still has no clue why she dumped him… until the end of this episode at least.  All three of these dudes seem to be one note characters so far hopefully that will change.

What I can say with certainty is that the script was great.  Fantastic jokes, quick banter and although I have a wee problem with the basic premise, I very much enjoyed this program.  If we can get past the many tics and quirks that make Jess so unattractive, like random singing, glasses, and social idiocy, and flesh out these characters in more realistic ways, this show may become a fun and irreverent hit.  Then again, all comedies seem to keep trying to out-irreverent themselves maybe a funny show that is just funny would be a good way to go.

In the end I am not annoyed with Zooey Deschanel.  She is gorgeous, she can be funny, and she is a gem when having a marathon viewing of Dirty Dancing (very similar to Kristin Wiig watching Cast Away in Bridesmaids).  As to whether or not her spaced out adorkable and quirky character can become something more than one note that has yet to be seen.

I could not help but think of one of my all time favorite (and quickly cancelled shows) Wonderfalls.  Created by Bryan Fuller (Dead Like Me, Pushing Daisies) in 2004, Fox aired a whopping four episodes before cancelling the show.  When the entire fourteen episode series was released on DVD I ate it up this show has a quirky young female protagonist who works in a tourist trap at Niagara Falls even though she has a philosophy degree.  She is misanthropic and a heavy drinker then a wax lion talks to her and makes her do nice things.  New Girl has the potential to go somewhere great hopefully, we will get a chance to find out if those in charge at Fox dont have too itchy of a trigger finger (again!) on the old cancellation machine.

Ultimately, I was just happy to watch some TV that wasnt animated or reality based that was more than enough of a treat.