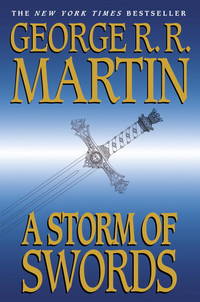 Warning:  If you have not read A Game of Thrones, A Clash of Kings or have not finished the HBO series first season, stop reading now!  There will be spoilers immediately.  Thank you, and may the odds be ever in your favor wait… ummmm… wrong franchise… thanks.  C.J.B.

At the conclusion of A Clash of Kings, the battle on the Blackwater and at King’s Landing had been won by the Lannisters, Winterfell destroyed, Renly dead and Stannis defeated… many of the main character’s fates unknown and Jon Snow now turned oathbreaker… or has he?  Much was left in the air, little was answered and nothing but sadness and defeat faced most if not all of our protagonists as the path seemed clear for those we would consider villains.  But in A Song of Ice and Fire… we can never remain too sure of who exactly is the good guy and who is the bad… and it is this form of masterful storytelling that Martin employs in perpetually keeping the reader both on the seat of their pants and confused while always giving you just enough information to piece everything together in the end… if you have been paying attention.

Like the previous two novels in this series, A Game of Thrones and A Clash of Kings, the story picks up immediately after the events of the previous book… in this case it may even begin just prior to the events at the end of A Clash of Kings… and from there we are introduced to all new characters, exotic locals and left wondering what in the hell is really going on… until we reach about the last third or quarter, and all of the pieces that Martin has spread out of this board that is his epic and mythical land of Westeros begin falling into place… and the rug is suddenly pulled out from under our collective feet and the tale is upended and the rules have all changed and you are left having to set the book down and recover before being able to pick it up again.

In the first book, we shuddered at the beheading of a major and beloved character.  In the second… the death of two innocents… the resurrection of said innocents (metaphorically that is).  And now the third… I shan’t give away anything… for finding the answers in this, the third and natural conclusion to a number of story arcs, was the most fun I’ve had in this entire series.  Although it feels like a conclusion, it is most decidedly not.  This is third of a planned seven book series… and we only have five so far.  But more than enough answers to be incredibly satisfying and leave you yearning for more.

When things begin to pick up in that final third or so, it became an impossibility to put the book down.  Unfortunately, things like sleep, children, work and hygiene prevented me from plowing through this story as quickly as I would have liked to… but I was able to better savor much of what happened and was going on by slowing up a bit and getting as firm a grasp of everything that happens as I could.  With this novel, many of the original loose ends from various intertwining tales getting sewn up… but for every answer there seem to be more questions… and more characters… and more intrigue, sex, battles and death.  Wildlings and dragons… snarks and grumpkins… wolves and lions.

By far my favorite of the first three novels in the series.  When shit hits the fan in this story, it is massive.  At least twice, I had to set the book down for a while and recuperate from what I had read.  The fates of everyone in these books always dangle by a very thin thread, and in A Storm of Swords… threads don’t hold well against steel…