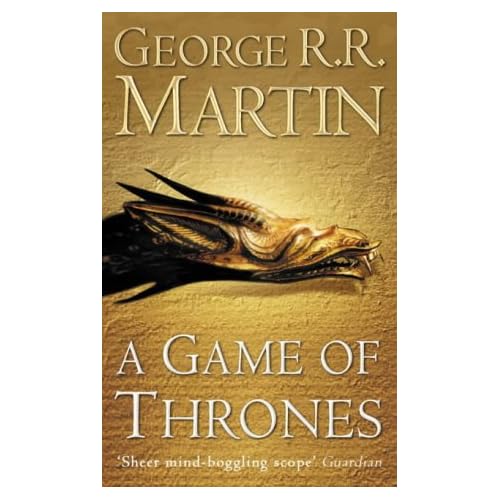 When I began watching HBOs Game of Thrones I swore up and down that I would not read the books and would allow the story to unfold with the program as opposed to jumping the gun and reading ahead of the story.  I swore the same thing with The Walking Dead I am weak.

Annoyed at not fully understanding everything that was going on in the TV show, I grabbed a copy of A Game of Thrones from Target and broke another unwritten rule of mine I purchased a book with an image of the TV shows star, Sean Bean, on the cover.  I hate doing that I prefer first edition hard covers but alas, I was on my lunch break and there isnt a book store for miles around this desolate wasteland of culture that is the East Bay (my apologies to my East Bay friends but people just dont seem to read out here instead they hang testicles from the backs of their vehicles so wrong).

What struck me immediately when I began reading the book is how close to the source material the HBO show stuck.  From page one, I was informed immediately on a much deeper level about motivations and internal dialogue that would simply be impossible to convey on the screen without a million exposition dumps although in the case of the show they have taken a completely new tack with sexposition exposition dumps with sex as the background (a new term recently coined by who knows who… but a great one).

The series was already halfway through when I began reading and I was able to catch up around the seventh episode in a ten episode season.  What a difference knowing the outcomes, the internal thoughts, the back stories and hinted at depravations of many of the characters.  Also motivating me to read the books is the fact that The Onions AV Club had been writing up two different reviews of each episode one for newbies (those who have not read the books) and the other for experts (those who have read the books obviously).  I hate feeling excluded…and love feeling self righteous and “in the know”.

OK so that covers why I read the book now I suppose I should mention what in the hell this book and television show is about.  This series of novels, A Song of Ice and Fire, is a story set in the fantasy realm of Westeros and revolves around the lords and houses of the seven kingdoms.  The story and show have been referred to as a cross between The Lord of the Rings and The Sopranos or my favorite, The Lord of the Rings where people actually get horny and screw.  Within this realm is a king, Robert Baratheon his hand (a position that is basically the official right hand man of the king) has died and King Robert heads to the northern kingdom of Winterfell to ask his old friend Ned Stark to be his new hand.

That is about as basic of a set up as could be.  Throughout the story there are different families intrigue murder incest war and more than a few memorable characters, not least of which is one Tyrion Lannister.  The Lannisters are a fascinating family the Queen is a Lannister, her twin brother is one of the Kings Guard and Tyrion well he is a dwarf of high intellect and low appearance.  All of this makes for a wonderfully tangled web.

I am very purposefully leaving out any and all plot points due to the fact that one of the greatest thing about this book, and the series in general, is that the author, George R. R. Martin, manages to write a surprisingly shocking tale where things happen that you will simply not expect.  If you have seen the show, you know precisely what Im referring to.

Although the machinations of back stabbing and twisted morality can be difficult to keep track of throughout the novel and the host of characters can be tough to keep track of it is a very clearly written novel that reads very quickly and has a fantastic conceit in that each chapter is one characters point of view.  There are great events that happen that we only get second hand knowledge of throughout the entire saga an interesting way to present the twists and turns and brilliance in the way one sentence can have massive repercussions.

I dont believe Ive made a compelling case to read this novel (and ultimately the entire series).  The HBO show made a much better case for reading this story.  After reading about half of my Sean Bean covered edition, I purchased the four book set (A Game of Thrones is the first of three but ultimately it is meant to be a seven part series of which the fifth book is being released next month), handed off that copy to a co-worker another co-worker was the first to tell me of these novels prior to the HBO show even being announce once the co-worker I gave my copy to finished he passed it on to another co-worker, who after reading half of it, purchased the four novel Kindle edition and Ive now passed that book onto a third co-worker (and a fourth purchased her own copy as well).  I am currently working in a Song of Ice and Fire heavy environment with different people at different places in the saga and having to bite various tongues in order to not spoil anything beyond what we have seen on the program.  Our saga is becoming as twisted and tangled and the novels.

In order to maintain a completely spoiler free environment, I shall cease any further discussion of this book until I review the second novel, A Clash of Kings which Im halfway through at this point.  If you want a good medieval/fantasy genre read, seriously consider this series.  I am generally not a fan of the genre other than Tolkien but there is no doubt that I am a new fan of A Game of Thrones: A Song of Ice and Fire, Book 1.