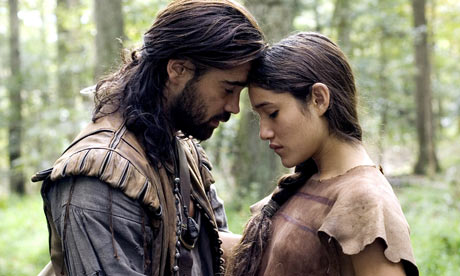 In light of Terrence Malick’s The Tree of Life getting it’s wide release this weekend, I felt it appropriate to highlight his last film, 2005’s brilliant film The New World.  I cannot begrudge anyone who does not care for Malick’s work… his entire directorial resume consists of four films… Badlands (1973), Days of Heaven (1978), The Thin Red Line (1998) and The New World.  All considered classics by those who love his work… considered dull and pretentious by those that don’t.  I am very much the former.

If you were raised in the United States and went to elementary school, then you are aware of the Pocahontas and John Smith love story and how she came to the aid of the English settlers at Jamestown thus becoming a pariah to her own people and a bit of a freak show to the English.  We have read of the tale and have seen the cartoons… but never, have we seen it the way Malick tells it.  The New World is that story… but retold in as accurate a way as possible… and as poetically as possible.  The film is violent, gorgeous, maddening and meditating… there are great stretches of silence and a ton of voice over narration (a very common Malick technique)… and at no time is the name Pocahontas ever uttered.

The opening scene is of natives in a green land frolicking and running free… running to see what is slowly approaching the shore… as strings swell, a ship is seen entering this natural harbor and with the knowledge of hindsight, we know what is on board that ship… we know that this land will never be the same… that these people’s lives will never withstand the onslaught of European men and everything their arrival meant.  And for the first time that I can recall (at least until Pixar’s Up), I found myself tearing up before a single word had been spoken.

The cast all give remarkable performances… Colin Farrell as Captain John Smith, Christopher Plummer as Captain Newport, Christian Bale as Pocahontas’ eventual husband John Rolfe and of course, Q’orianka Kilcher, a complete unknown, as the lovely Pocahontas herself.  Each performance is as nuanced and well crafted as I’d ever seen.  I began to see Farrell in a completely different light after seeing this even though his portrayal of Smith feels very much like the rogue he is himself, it simply works to great effect.

But the performances, as radiant as they are, pale when compared with the visuals… with the way the story is allowed to unfold between wordless passages and bursts of violence… the attention to detail in the clothing, in the way he allows the camera to linger on a moment in nature, in the depiction of Jamestown (which I understand was meticulously recreated), in the lack of window dressing… by which I mean that Malick shows both the good and the bad of each peoples. This is not a “let’s bash the white man for intruding and stealing the world of the savage” type of film… it is a mediation of this fact in history.  There is little or no moralizing (at least as far as my memory serves), rather, we are presented with what happened and we can come to our own conclusions.  I suppose it would be impossible to spoil what is basically known history… but the way her life, and the story itself unfolds, puts other films regarding this tale to shame.  There are aspects depicted here that caught me off guard and enlightened me greatly.

When this film was released, it gained little to no love from the masses.  Sure, critics were falling over themselves left and right… but the public would have none of it.  That saddened me at the time.  One of my favorite critics, Mick LaSalle of the San Francisco Chronicle, was one of the few people who saw this film as I did… if not the best film of 2006 (it opened wide in January, 2006), than possibly one of the best ten films of the decade.  I do believe at decade’s end, it was on his list… it was also on mine.

Give yourself a treat…. based on the paltry box office gross and most peoples lack of knowledge of this film’s existence, I would say you probably have not seen The New World.  So buy it, rent it or stream it… hell, you can even borrow my copy… just see this movie!