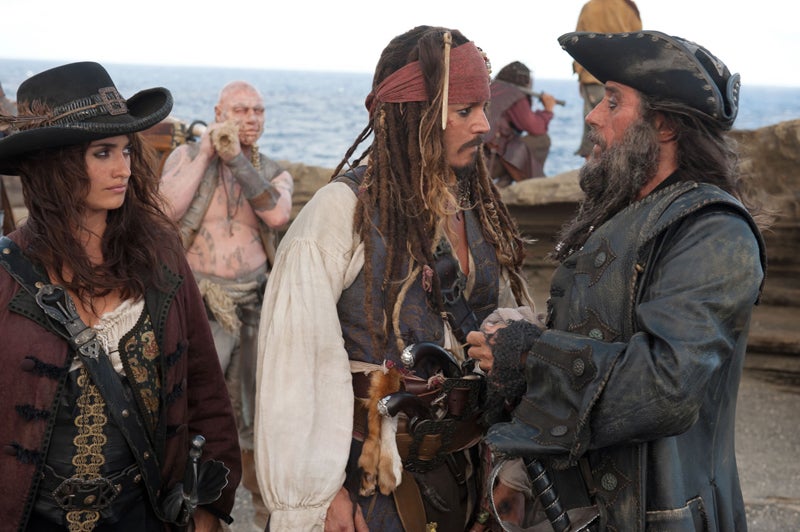 Pirates of the Caribbean: On Stranger Tides feels like two movies one rollicking pirate tale of mysticism and treachery the other, an opportunity for Johnny Depp to mug and prance about in his stunted Peter Pan-like character of Jack Sparrow.  One story has Ian McShane as Blackbeard and Geoffory Rush bringing his Captain Barbossa back into action in a classic yarn involving a peg leg, a beloved ship (The Black Pearl making a miniature cameo) and revenge whilst searching for the fountain of youth in order to screw with a prophecy foretelling of Mr. Beards death at the hand of a one legged man.  The other story?  Its Jack Sparrow doing what Jack Sparrow does which is essentially nothing but bringing the narrative to a halt.

Allow me to say this I like Johnny Depp.  I think he is a fine actor, who, as of late, has been selecting increasingly poor films to be in.  I fear for his Nicholas Cage-ism.  But his aping for Tim Burton and whatever it is he is doing with this Jack Sparrow gig is getting old quickly.  His character doesnt grow has no depth is more a caricature of himself than it should be.  Yes, I suppose its meant for children, so perhaps this is like Elmer Fudd, always hunting the rabbit that he cant get but what is Sparrow after?  Why was he even involved in the fountain of youth?

To complain about a Pirates of the Caribbean movie is preposterous they are crap.  The first one was enjoyable enough good on Disney for managing to make a movie based on a theme part attraction not only watchable but fun.  The next two are better off forgotten but much of that blame is laid at the feet of the writers and the remarkably poor chemistry between Knightly and Bloom.  But the fourth?  Ian McShane is great as Blackbeard but he never lit the braids in his beard dammit!  Penelope Cruz is always watchable and does a wonderful job as Blackbeards daughter and an old Sparrow flame.  Plot holes involving how Barbossa is still alive and now a captain in His Majestys Navy ok getting a bit thin.  A zombie crew and the search for mermaids ugh.  Ponce DeLeons ship and a call-back to the theme park ride in the form of dead guy in bed with magnifying glass and map?  Sigh alright.

I dont really know what else to say about this movie.  It felt like it could have been great.  A story about pirates, the English and the Spanish all searching for immortality and/or eliminating pagan gods in the name of the one God.  Instead, we are treated to a goofy romp with a borderline transsexual pirate who has overstayed his shtick.  I will end on a positive note at least we no longer have to see one of the myriad of trailers for this movie anymore.

If they make a fifth keel-haul me,
Cornelius J. Blahg