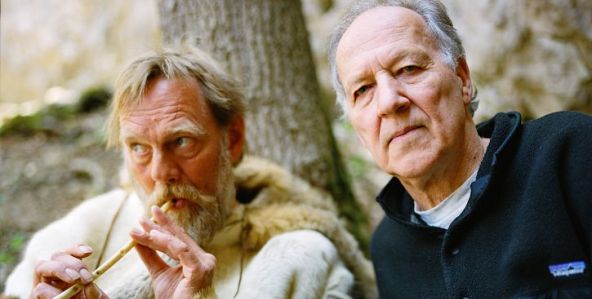 Shortly before Christmas in 1994, three people, Eliette Brunel-Deschamps, Christian Hillaire and Jean-Marie Chauvet made an incredible discovery while searching for caves in the Ardeche region of southern France.  They found a cave alright… sealed from any contact over 20,000 years ago by a landslide… and inside were found the oldest known paintings dating to approximately 32,000 years ago.

Immediately after this discovery, Jean Clottes of the French Ministry of Culture went to what is now known as the Chauvet cave and began what has now been a 17 year study on every detail imaginable about this find.  But first, he took a great many slides and brought these amazing images to the University of California at Berkeley.  Mrs. Blahg and I happened to be fortunate enough to be taking Archaeology and Prehistory courses in San Francisco at this time and the greater fortune to have a professor with enough wherewithal to make sure we were there for Dr. Clottes’ presentation.

It was stunning.  To be among the first human beings in over 30,000 years to see these gorgeous images of extinct bison, mammoth, cave bear, cave lion and aurochs… to be witness to the hand of a man and the art that hand created.  It was an experience of immense significance to me.  To share in this piece of human history with those around me… and in that moment to share a great laugh.  During the question and answer period of the presentation a woman stood up and asked Dr. Clottes why he kept referring to everyone as “mankind” and excluding women (bear in mind… this was Berkeley).  His response is one that I shall cherish forever, “Because I am French.”  A great laugh emitted from the hall and all was well again.

Apparently, Werner Herzog had a similar experience.  He was granted the opportunity to meet with Dr. Clottes and many others to bring a pared down film crew and a non-professional 3D camera into the vigorously guarded and sealed Chauvet cave system to bring the experience of being in the cave itself to those of us who will never have that chance.  The result is a film that gave me a direct line to our ancestors… a direct line to what it means to be a human… a direct line to what may be the greatest art ever created.  The film is Cave of Forgotten Dreams.

Seeing a slide or a picture of anything is always inherently limiting, hence the great explosion of 3D in the cinema lately.  Herzog uses the 3D to give us that depth of field… to see the light reflecting from hundreds of calcite crystal formations in what is an absolutely beautiful cave regardless of the human touch… but best of all, to show how the artist used the contours of the rock wall itself to bring much of this ancient art to life in a way I hadn’t realized before.  The use of gouging at the wall for effect, of shadowing and notches from the wall taken out for eyes… for motion.  The way the light plays into the effects of animals moving… making sound… the flicker of light adding a dimension we could only imagine before this.  This is precisely what 3D is meant to do… to expand and enrich our experience, and Herzog nails it.

The film is narrated by Herzog in his now familiar German accent and is interspersed with various interviews of the people associated with and studying the cave.  Each of the interviews highlights a different angle in the research and brings to the forefront the multidisciplinary aspects of this type of research.  It involves anthropologists, artists, geologists and even a master perfumer.  At one point he interviews an experimental archaeologist who is wearing paleolithic garb of reindeer and playing a bone flute which happens to be of a scale able to play the Star Spangled Banner.  Herzog himself seems almost giddy with excitement and at times begins to wax poetic a bit and ponder whether the eight legs found on a bison represent a type of proto-cinema in it’s depiction of motion.

In addition to the art, there are cave bear skulls and footprints.  Not just bear footprints, but the footprints of an eight year old human and a wolf beside those tracks.  The questions are asked… did the wolf follow the child?  were they companions? were the prints separated by many years?  These paintings were made in a very real world… not a museum, not in this sealed chamber… but in an open cave system that was used by people over a period spanning over 5000 years in addition to cave bears and other animals.  At the far end of the cave lies a cave bear skull that is positioned atop a flat rock and pointing towards the cave mouth.  An ancient reminder of the spiritual aspect of man.  Torch marks scraped on the walls preserved for tens of thousands of years… untouched.

But the finest moments of the film are when the camera is allowed to simply move across the walls.  Sitting in the darkened theater watching these remarkable representations of a past we will never know. There were times I found my breathing changing, a sense of awe.  A similar feeling came over me the first time I stood beneath the Sistine Chapel.  Study the images all you want, but until you are in it’s actual presence, you can never understand it’s impact.  I may not be able to stand in reverence in Charvet itself, but this film is a fantastic bridge.

This is a film that is meant to be seen in a theater and meant to be viewed in 3D.  It heartened me to see as many people as I did in the theater… and disheartened me a bit to realize the vast majority of the people were elderly.  Only one other was younger than I, and she was there with two elderly persons, possibly grandparents.  This is our heritage… this is who we are.  When I was showing Dr. Donald Johanson, the discoverer of Lucy (A. afarensis), the tattoo of Lucy on my upper right arm, he asked me why I chose her.  I said I liked the fact that she was a symbol of something that has no economic, cultural or political baggage… he and others laughed a bit at my naivete.  I immediately corrected myself, a symbol of something that should not have any economic, cultural or political baggage.  She, and Chauvet, are ours as humans.  This is where all other things break down and diverge from… Cave of Forgotten Dreams is an incredible gift to humanity and you owe it to yourself and your children to bear witness to our history.