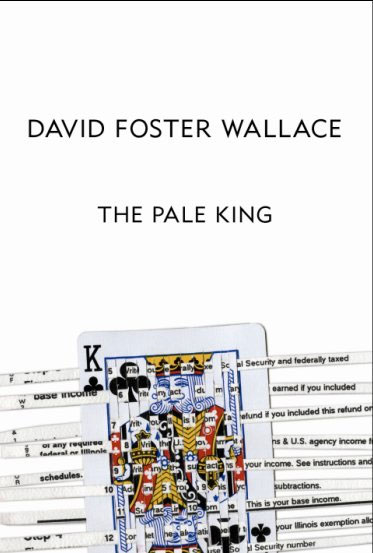 After recently completing David Foster Wallace’s magnum opus Infinite Jest, I swore up and down to myself that I would take a mental vacation from anything remotely literary in the sense that I did not wish to tax my brain any further than it had just been taxed and was gleefully awaiting reveling in craptacular books, magazines and comics.  I’ve wallowed in the muck for a couple of weeks now… and my eyes continued to look over at my bookshelf at Infinite Jest and it’s study Elegant Complexity… knowing that I wanted to tackle it again… but knowing that I would become completely and totally invested.

But along the way… every magazine I’ve read, whether it be Entertainment Weekly, Time, Esquire or Rolling Stone, has had a feature on DFW’s latest novel, The Pale King.  It was taunting me… it was cajoling me daily… but I figured I had at least until April 15, the day it would be officially released, to deal with whether or not I would dive head first back into the world and mind of what I have belatedly come to realize was our greatest contemporary author.  Then I found out Amazon was sending out copies early with Little Brown’s permission… and with one click buy… done.

My copy arrived yesterday… and now I wasn’t simply being tempted with the idea of the novel… I was being tempted by the novel itself.  I convinced myself I would only read the foreword written by the novel’s editor, Michael Pietsch, who was also the editor for IJas well as DFW’s friend.  The foreword describes the history of The Pale King from the times DFW told him about what he was working on to his early death and into the point at which Karen Green, DFW’s widow, helped Pietsch assemble all of the manuscripts, notes and files for The Pale King and gets into the details of how he cobbled together what would become David Faster Wallace’s final unfinished novel.

The book had no obvious beginning… no obvious ending.  Like Infinite Jest, SFW intended this novel to have no discernible plot… no completion.  Taking place withing an IRS auditing office in Peoria, the novel explores boredom.  The boredom of being an accountant… the boredom of middle America… perhaps the very boredom of living.  The Pale Kingwas put together by Pietsch, not as a cash in on DFW’s name and death… but put together as a testament to his friend.  He readily admits that Wallace would not be pleased with an unfinished work being publish as he was a perfectionist… he also admits many words and phrases would have been altered by Wallace had he lived to finish it… but he didn’t… so Pietsch did the best he could under the circumstances.

Everything I read in the foreword, I had previously read in all of the above mentioned magazines (the above pic is from Esquire… I dig it) as well as much material found online w/r/t this novel.  I could wait no longer… my mental vacation is officially over, and I began reading The Pale King last night.

I didn’t get very far… like Infinite Jest the writing is dense.  The opening sentence may not be what was originally intended as the opening… but it is gorgeous…

Past the flannel plains and blacktop graphs and skylines of canted rust, and past the tobacco-​brown river overhung with weeping trees and coins of sunlight through them on the water downriver, to the place beyond the windbreak, where untilled fields simmer shrilly in the a.m. heat: shattercane, lambs‑quarter, cutgrass, sawbrier, nutgrass, jimsonweed, wild mint, dandelion, foxtail, muscadine, spinecabbage, goldenrod, creeping charlie, butter-​print, nightshade, ragweed, wild oat, vetch, butcher grass, invaginate volunteer beans, all heads gently nodding in a morning breeze like a mothers soft hand on your cheek.

Immediately I was drawn in with that sentence.  The first chapter is short… concise.  The second involves and IRS agent on a plane… and his boredom after the nuts are gone and follows his mental track as he thinks about the CPA exam, about work, about the little house and cars outside the window on this 50 minute flight.  My mind began to wander and I had to reread a few sentences.

The boredom becomes infectious… and I can see how difficult this novel will be to get through. Fortunately I knew this going in and am as prepared to receive the last words DFW has given us.  I may have been late coming into David Foster Wallace’s world, but I’m grateful to be granted access and am excited to see what The Pale King has to offer.