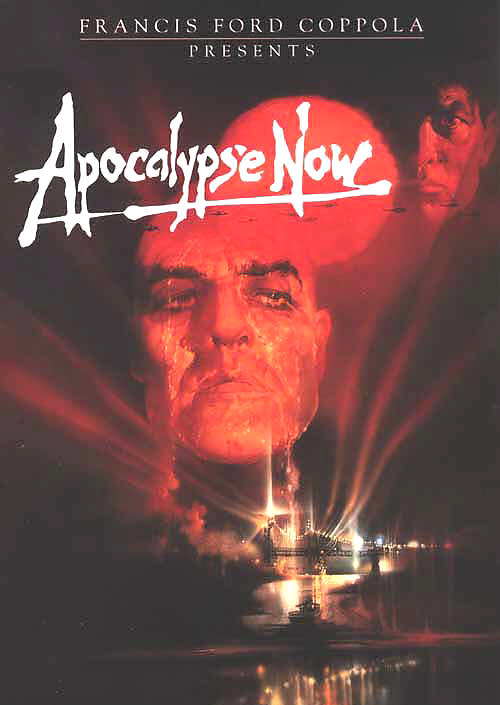 Welcome to the Sheen (nee Estevez) Family Extravaganza!  This week I’m taking a slight break from my usual one DVD format to bring you three fantastic movies brought to you from the family Sheen.  After giving so much over the past couple of weeks in terms of depressing real life drama mixed with horrible traffic accident rubbernecking by the population at large I thought I would take a moment to highlight a few of the high points of this particularly troubled family’s filmography.

If you do not already have this film in your DVD collection, run out this moment and get it!  Very few films have been dissected, with regards to both the process of creating as well as the film itself, as much as Francis Ford Coppola’s masterpiece Apocalypse Now.

Beautiful, harrowing, frightening and haunting are but a few of the adjectives used to describe what in my opinion may be the greatest film on war ever created.  I am very much a fan of both the original release as well as the subsequent Redux version.  If you want to delve deeper into the story and spend a few languid moments and a couple more laughs, check out Redux.

Martin Sheen, father to Emilio and Charlie, in this film replacing Harvey Keitel, had a heart attack in the middle of filming and had to take a break before returning to finish the work.  As Captain Willard, Sheen plays a man who begins in a nervous breakdown… collects his bearings and goes after a Colonel gone mad (Marlon Brando) in the midst of the Vietnam jungle.  By the time he reaches Colonel Kurtz, the difference between the two men is negligible.

Beautifully filmed, perfectly directed, preposterously brilliant acting… one of my all time favorites.

Emilio Estevez in The Breakfast Club

Not since Easy Rider as a movie so defined an entire generation… mine.  When The Breakfast Clubwas released in 1985 a voice was given to each cliche that we recognize as being the modern high school… the jock (Emilo Estevez), the brain (Anthony Michael Hall), the criminal (Judd Nelson), the princess (Molly Ringwald) and the kook (Ally Sheedy).  The late John Hughes gave us all the opportunity to relate to someone… to mope in whatever pool of self involved myopia we all swam in.

Emilio is now currently more a director (Bobby) than actor, but his turn as Andrew Clark, the wrestler in trouble for taping the hairy guy’s buns together is one that has stuck for over two decades.  Along with his fellow Brat Packers (I believe the phrase came after St. Elmo’s Fire, also with Estevez), Estevez helped to redefine what a teen movie was as well as defining the decade at large.

He has been in a number of great movies during the mid to late 80’s and into the 90’s, but it will always be his role as the jock that I will remember the most fondly.

Now we come to the nexus and nadir of the Sheen family… Charlie Sheen… nee, Carlos Estevez.  A once gifted actor now reduced to tabloid fodder, drug addiction and front page psychotic breakdowns.  I’ve previously given my thoughts to the current state of the Vatican assassin warlock, but I would like to point to a moment when he was a young twenty year old actor appearing in what would become the 1986 Best Picture winner… Oliver Stone’s Platoon.

Whether you are a fan of Stone’s more recent work or not, Platoon is an amazing piece of work, and a fascinating look at a war Sheen’s father had already dipped into with the previously mentioned Apocalypse Now.  As a fan of Martin’s work, it was odd to see his son, who is quite the spitting image of his father, in a role so similar… but as a minor private as opposed to a colonel.  But as the green new recruit coming face to face with the horror… the horror… of the Vietnam war, Charlie is fantastic.  Granted he is also working with people such as Willem Dafoe, Tom Berringer and Forest Whitaker, who I am sure helped elevate all performances… Charlie was playing what ostensibly is Oliver Stone.

This is the Charlie Sheen I am more happy to think about these days… not the hot mess that he has become.  I still believe this Charlie is buried in there somewhere… I hope it isn’t too late for his career to come full circle and back into something worthwhile.

Well… that concludes my Sheen (nee Estevez) Family Extravaganza… as I like to say at the end of each DVD of the Week… buy it, rent it or stream it… just see these movies!