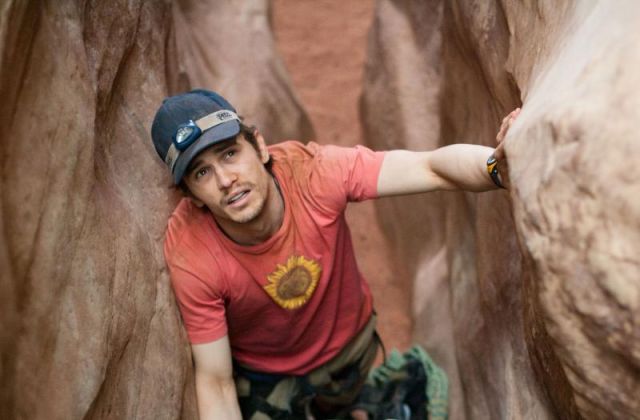 Going into any movie based on true events is always a slightly different experience than going into a work of fiction.  The element of surprise isn’t in what happens, but in how is it depicted.  With 127 Hours, the new film from Danny Boyle starring James Franco as Aron Ralston, the entire point of seeing the film is knowing that (spoilers ahead… sort of) this is the story about the guy who got his arm caught between a rock and a wall and cut it off.  And if you know anything about Danny Boyle as a director, you know you will experience Aron’s pain right along with him.

The film opens with a split screen montage of society moving… of Aron prepping for a trip… reaching for, and barely missing his Swiss Army Knife… music blaring as he drives through the night to the canyon lands of Utah. Armed with nothing more than some basic climbing gear, a Nalgene bottle, camera and video camera Aron heads out on his bike 17.3 miles in the desert to the Blue John Canyon. Along the way he meets up with two very lovely young women (Kate Mara and Amber Tamblyn) and pretends to be a guide… Franco is as always, charming. I’m guessing he may be a wee bit more charming than the real Aron… but that’s not really fair now is it? At this point, the movie resembles a Mountain Dew commercial. A beautifully filmed Mountain Dew commercial. After a glimpse of what a hard climbing and playing guy Aron is, his dilema begins. Alone in this narrow slot canyon, a boulder rolls down and pins his right arm against the wall. We see the title appear and the first cigar burn. Twenty minutes into the film, Aron is pinned.

Much has already been made about the actual “arm amputation” scene, so I’ll just get to that right now. It really is not quite as bad as many reports have made it out to be. Yes, it’s squirm inducing… and I saw many grown men wiggling around and a few women bury their faces in their neighbors chests (I’m guessing they knew each other first)… but it is not horror movie foul. A recent episode of The Walking Dead was far worse. There were many reports of people vomiting and passing out during screenings of this… and I’ve now heard that at least the vomit incident was due to stomach flu. Do not allow this one scene to hold you back from seeing this movie. If you aren’t interested… fair enough… but this movie is quite fantastic.

James Franco basically has a one man show ala Tom Hanks in CastAway, but instead of a volleyball, Aron has a video camera… and a director with the desire to film imagination itself. At times Aron talks into his video camera, recording his last thoughts and farewells… his fears. It’s both our way of knowing where he is in his own head and his way of keeping his head. Franco pulls off an amazing performance. Nothing felt forced or over dramatized. I imagine having Aron’s actual tapes to go off of as well as Aron himself as a resource helps, because it all felt so natural and real. At other times we are given over to Boyle’s fancy…

Throughout his ordeal, Aron would fantasize… women, Scooby Doo (the women we met earlier in the film were having a party with a Scooby Doo bouncy), family and in an incredible scene very reminiscent of a previous film (the Trainspotting toilet scene, minus the toilet aspect) of Danny Boyles. Many of his now familiar techniques are employed throughout the film. From the initial split screen to fantastic shots from within an object (we see Aron’s mouth as he drinks from his water bottle… from the perspective of the water) there is no doubt who’s movie we are watching. I may have said that James Franco has a one man show, but ultimately it’s very much a two man show (three is you count the real Aron, whose book Between a Rock and a Hard Place is what this movie is based on). The cinematography is constantly gorgeous… taking in the colors of the desert walls, the textures… watching Aron’s hand move along the wind blown curves etched into the stone… I felt the grit beneath my fingertips. I don’t imagine it would be easy to turn a movie about a guy stuck in a canyon for 5 days who can’t really move or do much into anything exciting… but Boyle pulls it off.

One aspect of this movie that I personally enjoy is the fact that when the original event occurred, I was just beginning a whole series of solo backpacking trips. I was very aware of the danger of going out into wild places by yourself, so myself and others scoffed about this when we heard that he hadn’t told anyone where he was going. Dismissed him as a bit of an idiot. Between that time, 2003 and now… and either because of time or having seen the film now and his realization of his mistakes, I’m not in the least dismissive. What he did was quite amazing. As to whether or not I could do something like that… that is the question we probably would all ask after seeing his story. It’s a compelling story, and one I would highly recommend to anyone who can enjoy a movie trapped in a canyon.