Created in 1998 by former Blur front-man Damon Albarn and Tank Girl creator Jamie Hewlett, Gorillaz came into public awareness in 2001 with the release of their first album, simply titled Gorillaz.  Although not technically not their first single, Clint Eastwoodbroke out in such a way that everyone from most walks of life had at least heard parts of… “I’m happy, I’m feeling sad… I’ve got sunshine, in a bag… I’m useless, but not for long… the future, is coming on… is coming on.. is coming on..”.  I mean… what was this song?  Was it a hip/hop rap song… that is Del the Funky Homo Sapien.  Was it BritPop… obviously that’s Damon Albarn singing.  But the biggest question loomed… is this band, Gorillaz, real at all?

The question isn’t as easy to answer as it might seem.  The bands member consist of four cartoons.  Murdoc Niccals, the Satanic leaning bassist/founder; 2D, the blue haired skinny idiot with a voice (Albarn’s apparent stand in); Noodle, the (originally) 10 year old Japanese guitarist; and Russel Hobbs, drummer and harbor for the spirit of a fictional slain rapper named Del.  Elaborate backstories were created for each of these personalities… yet… they aren’t real.  The first album had a few random collaborators and was simply a bit of a fun and slightly goofy album with hints of reggae, dub, hip/hop, BritPop and basic rock.  Between Clint Eastwood, Tomorrow Comes Today and 19-2000, the album had more than a requisite number of great songs to qualify it as a good album… however, myself and many simply could not get over the idea that this was yet another cynical cash grab gimmick.  I can’t say I took it very seriously at all.  Who or what they were didn’t matter much.  Their videos were awesome… the music was fun.

Fast forward four years to 2005… post 9/11… a different world.  Not really a world of goofy cartoon bands.  Yet, 2005 saw the release of what I will unabashedly call an album of absolute genius…. Demon Days.  The first single from this decidedly dark and occasionally imposing album may be one of the catchiest pop songs of the past decade… Feel Good, Inc.  Not only did it help to establish the band as a true force to be reckoned with… it helped spur on sales of Apple’s ubiquitous iPod through a brilliant ad campaign featuring some sexy shadows dancing to an awesome drum and bass line. 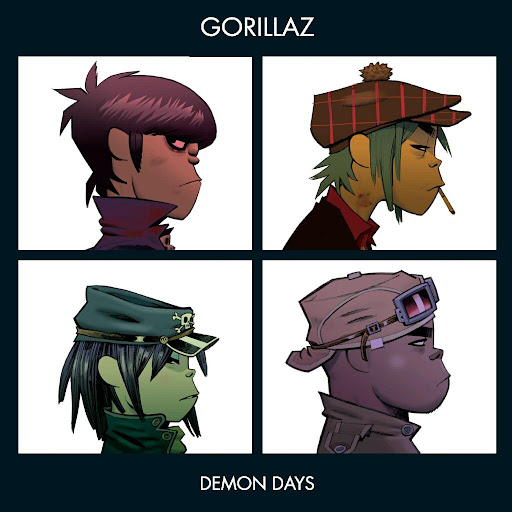 From beginning to end, Demon Days did not feel like the previous outing.  It had a cohesive quality to it that screamed out “listen to this album… not just the songs”.  Opening with a sample from the original Dawn of the Dead, moving through songs depicting a world gone mad… a dead world… a world of pollution… a world of pleasure at the expense of everything else… and then the videos were released.  No longer were the videos cute little romps in a Jeep or being chased through a graveyard by red eyed gorillas… now the stakes seemed more desperate… more depraved.  The art work improved, and a story line appeared.  Filled with beautiful imagery and emotion, the visuals and music combined to form a real concept.  Murdoc, 2D and Russel, trapped in a Hedonistic cycle of pleasure… while young Noodle floats calmly above the fray on her floating island with her Quixotic windmill propelling her along…. until the black helicopters appear…

And the story continues with another single… El Manana… where we see the final outcome of Noodle on her floating island… the end of happiness and joy… a win for the faceless corporate interests that meld finance and war into one.

(I couldn’t embed the video for this… it was “disabled on request”… but here is the link http://www.youtube.com/watch?v=5muSKdAeWBM&p=1D09C7E4480ADBE4&playnext=1&index=5

Again… is this real?  Obviously not the life and death situations facing these cartoons… those realities are anything but.  However… the music is very much real.  What about live performances?  That’s the trick here isn’t it… how do you create a live performance with cartoons?  Attempts were made with some awards ceremonies after the first album… some very cool visuals being projected on giant screens with the (real) band playing behind them and collaborators coming out in front.  It worked… but in a very limited fashion.  With the release of Demon Days, the stakes were raised, and Mr. Albarn and company met the demand with a one off concert at the Manchester Opera House.  A performance of the album in it’s entirety, complete with most collaborators.  This feat took hundreds of participants and the results were stunning (the show is available on DVD).  No longer hiding the band completely… but still shadowed.  The visuals still present, but not overwhelming… this time the music spoke.  They repeated this for 4 night in Harlem at the Apollo where Dennis Hopped joined them for a reading of his piece on the album.  They subsequently released a graphic novel/autobiography of the band titled Rise of the Ogre, deepening their mythology and backstory and creating a complete world for themselves.  Then things went silent for a few years…. With the release of Plastic Beach, the band created another masterpiece.  Although the first single Sytlo left me a bit disappointed when I first heard it… in context with the rest of the album it works… not just well, but amazingly so.  Equally as moody as it’s predecessor yet nowhere near as dark.  Following the storyline further (if you want to know the whole tale either get the graphic novel or read the Wikipedia entry… it’s fun) and moving the tale from Kong Studios to an island made of garbage… Murdoc has captured 2D to record the album, Russel is swimming in a toxic ocean alone and becoming a giant and Noodle, previously thought dead is on her way to either take revenge or to kill a cyborg version of herself created by Murdoc.  Silly, I know.  But the music stands above almost everything else I’ve heard this year.

One particular song stands out for me… the second single off of this album, On Melancholy Hill… absolutely beautiful and warm… possibly the happiest song with melancholy in the title…

As for live performances… the gimmick is over.  Gorillaz are currently embarking on their first world tour… and will be performing in Oakland tomorrow night… and yes… I, Mr. Blahg shall be there.  And on top of that… it will be my two young daughter’s first concert.  At 5 and 8, they are both huge fans.  Fans of the characters, the videos and above all the music.  There is nothing more cool that hearing two little girls sitting in the back of your car singing along to your favorite music… to the point where my 5 year old is dressing up as Noodle (now 20) as she appeared in the Feel Good, Inc. and El Mananavideos.  I even went so far as to become a member of the fan club to get pre sale tickets and paid through the nose to be in the 18th row on the floor.  My girls will have the experience of a lifetime… and hopefully a love of music for their lifetimes.

In conclusion… are Gorillaz real.  Yes.  The music is real… and the band has come out from behind the screen.  Damon Albarn and Jamie Hewlett have created both a visual and musical combination of political and social commentary… and they did it by being everything but themselves.